Pace of restoration work on transmission lines ahead of schedule 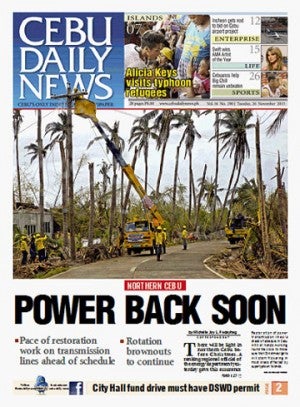 There will be light in northern Cebu before Christmas. A ranking regional official of the energy department yesterday gave this assurance as he announced that the ongoing work to restore power lines in areas devastated by supertyphoon Yolanda is ahead of schedule.

Antonio Labios, regional director of the Department of Energy (DOE), said the pace of work is even faster than that of Eastern Visayas.

Petilla’s self-imposed deadline of Dec. 24 is about five months ahead of the initial assessment of the DOE that it would take at least half a year to restore the power grid in the aftermath of supertyphoon Yolanda in the Visayas.

“My point here is at least during Christmas you’ll have electricity because the first sign of hope is always electricity. So that’s what we’ll strive hard to achieve.”

The DOE director said the limited power supply in the Visayas means Cebu will continue to experience rotation brownouts lasting one to two hours.

There are 38 electric power cooperatives helping in the restoration efforts.

About 1,500 personnel from the National Grid Corporation of the Philippines (NGCP) were deployed in the Visayas to help fix transmission lines.

The Cebu grid provides 23 megawatts of power to Eastern Visayas through a submarine cable from Daanbantayan town to Tabango, Leyte. From Tabango, the power service will go through Ormoc and Maasin then another submarine cable is linked to Bohol province.

Labios said that 19 megawatts of the 23 megawatts that Cebu provides was used in Bohol to power up the province for yesterday’s special barangay elections.

Labios said utility companies and power contractors restored last week the main transmission lines in the northern Cebu towns which means power is back in poblacion areas and highways.

The Camotes Electric Cooperative (Celco) has restored power in the town centers of Poro and San Francisco.

In Bantayan Island, the Bantayan Electric Cooperative (Banelco) was able to restore 50 percent of the backbone lines as the diesel power plant serving the utility service provider is still operational.

The areas serviced by Cebeco I and III are already restored and energized.

Petilla said he was making this fearless forecast to “satisfy the public (and) to show them that I am sincere and I will do my best.”

He initially found it “impossible” to restore power to towns hardest-hit by Yolanda by the end of the year because almost 160 towers and over 1,000 power poles were badly damaged. /Michelle Joy L. Padayhag, Correspondent with an Inquirer report