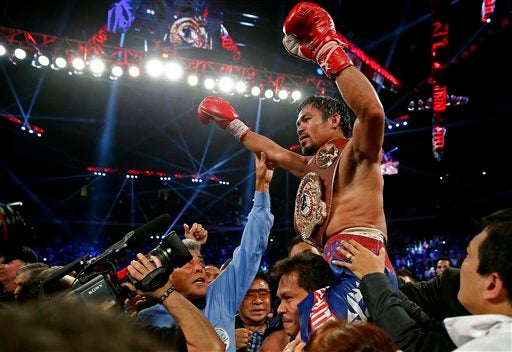 Manny Pacquiao, from the Philippines, raises his arms while wearing the champion’s belt as he celebrates winning his WBO international welterweight title fight against Brandon Rios of the United States, Sunday, Nov. 24, 2013, in Macau. Pacquiao defeated Rios by unanimous decision on Sunday, returning to his winning ways after consecutive losses. AP

GENERAL SANTOS CITY, Philippines — Manny Pacquiao’s victory in Macau was welcomed by his townmates in this city as an event that broke the gloom from the past three calamities that hit the country.

“We were hit by a triple whammy – the Zamboanga siege, the Bohol quake and typhoon Yolanda – but because of his win, we managed to cheer once again,” Golingan told the Inquirer.

Pacquiao’s townmates also went to every establishment showing pay-per-view broadcast of the fight and those treated with free viewing by the city government at the city’s oval covered court clasped their hands in joy as Pacquiao baffled Rios with his speed.

The 3,000-capacity covered court was filled up that many people had to stand up just to be able to watch the fight on a large TV screen.

“Our idol and hero is back,” those in the covered court chanted in unison as the Pacman pummeled Rios.

As in Pacquiao’s previous fights, the streets of the city were almost empty as people converged in malls, restaurants, movie houses, and even coffee shops to watch the fight.

Vice Mayor Shirly Nograles said she could not thank Pacquiao enough for making his countrymen happy amid the sorrow that Yolanda had brought.

In Davao City, hundreds of people who gathered to see the free live telecast at the village gym in SIR Phase II in Matina district, cheered when Pacquiao kneeled at his corner to pray before the bout started.

It was an act he had not done in his past several fights, especially those he was defeated in.

Several fans across the country had described Pacquiao’s defeats as the product of his conversion to the Born-Again movement. They pointed out that he rarely lost when he started the fight with a prayer on his knees.

Unlike in his past fights, the people watching Pacquiao’s fight at the SIR gym were more composed.

The Philippine Daily Inquirer noticed that the people would cheer louder each time the cameras focused on his mother, Mommy D.

Contrary to his past fights, Mommy D. was at the venue of the fight – the Cotal Arena of the Venetian – and watched his son’s bout with Rios.

Some fans said they were hoping that Pacquiao would defeat Rios in earlier rounds and were a little bit disappointed that the American boxer lasted 12 rounds.

Back in General Santos City, Vice Mayor Nograles said the city government has started preparing a hero’s welcome for Pacquiao.

“Definitely there will be a hero’s welcome. We will discuss the details of it,” she said.