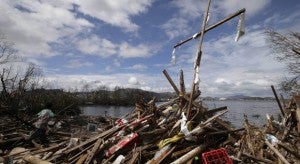 DAVAO CITY, Philippines — When she saw photographs and video footages taken of some of the victims of Supertyphoon Yolanda (Haiyan), Adelyn Tano, 44, knew she should immediately help.

She still vividly remembered how it felt to lose a loved one when her 17-year-old-daughter Keizle, and nine-year-old son Kent Angelou drowned in the June 2011 flood, the worst to hit Davao city, when their house in Matina Pangi was carried away by the current.

“I know how it is to lose everything, including your loved ones,” she said, as she talked about the storm surge in Tacloban City, which killed thousands of people, and caused one of the worst humanitarian crises in history.

“As soon as I saw them, everything flashed back to me again,” Tano, now in tears, said as she explained the main reason she joined the 600-people caravan organized by Balsa Mindanao, which travelled all the way from Davao to Guian and Tacloban.

The caravan hopes not only to bring much-needed food and other relief goods to survivors but medical services as well.

As a single parent, raising four kids alone, Tano used to run a small business in Kidapawan city, a three-hour ride away from this city.

On June 28, 2011, when Davao’s worst flooding occurred, she was in Kidapawan city, replenishing her stocks of chorizos.

She brought along with her the youngest child, who was still 9 months old at the time.

Tano said that as much as she wanted to go home, she had difficulty finding a ride that night because of the heavy rain so she was forced to stay in Kidapawan.

Tano was communicating with her children through mobile phone text messages . Her eldest, who was in college, was still at work at a branch of Kentucky Fried Chicken so only the two children were at home at that time.

Tano said Keizle and Kent texted her until 10 p.m. They later told her they were already sleepy.

At 11:30 p.m., Tano said she was awakened by text messages sent by the two children, informing her the water was already on the second floor, where they lived; and the bed was already floating.

“What are you going to do now?” Tano recalled what she frantically told Keizle. “Get out of there, fast!” Tano instructed them.

However, she felt weak when Keizle and Kent replied it’s not possible anymore because the water had caught up with them.

Tano recalled the pain of not being able to do enough when her two children were desperately asking for help.

That night, Tano said, she had called all “influential” people she used to know here asking them to send help for her children. But she was told that even 911 rescuers had trouble getting into the area at the height of the floods. She said she called back the children again at 12 midnight but their phones went dead. Even a ring would not be heard anymore.

Tano said she managed to find a ride at 3 a.m. for Davao but the sight of overturned cars and trucks as soon as she reached Ulas had alarmed her so much. But what can she do?, she said, adding that no vehicle could pass that time because the whole area was waist-deep in water.

It took a long while for her to reach home but as soon as she saw the whole neighborhood – or what remained of it – she instantly understood why Keizle and Kent could no longer answer her on the midnight of June 28.

Tano said it took her several days before she saw the body of Keizle along the shores of Matina Aplaya; while that of Kent was found across the sea, on the neighboring Samal Island, the following day.

“I saw his hands, and I knew it was him,” she said, “I knew it was him because he was wearing the necklace made of rubber given to him on his birthday.”  She said she knew how hard it would be for a mother to lose her children to a storm, that’s why, she wanted to help people in Tacloban in their darkest hours.

“I have nothing to offer but my strength,” she said.

“That’s why I volunteered. I hope to reach out to them because many good people also came to help me before, to help and console me in my anguish and distress,” Tano said.  “It’s my way of paying back their kindness,” she added.

Balsa Mindanao, composed of environmentalists, church workers and other volunteers traveled from Davao city to Surigao, leaving Lipata port for Liloan, Leyte, on their way to the typhoon hit areas in the Visayas.

“I wish to help them, hoping that doing so, my pain will start healing,” Tano said.