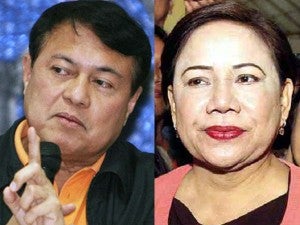 The Department of Justice and the Office of the Ombudsman should investigate, and file criminal charges against, several allies of President Benigno Aquino III who were also allegedly involved in the pork barrel scam but were not included in the first batch of the cases filed by the government.

In a six-page letter signed by BMP president Leody de Guzman and received by the DOJ on Nov. 20, the labor group claimed the Villars used their Priority Development Assistance Fund (PDAF), or pork barrel, on P151 million worth of projects that did not comply with the procurement law, while Tupas coursed P108 million of his PDAF to ghost projects of nongovernment organizations allegedly headed by a Godofredo Roque.

The BMP cited the Commission on Audit report from 2007 to 2009 that said that then Sen. Manny Villar and then Rep. Cynthia Villar were allotted P200 million in PDAF, for which they released a total of P168 million or more than 75 percent to fund soft projects in Las Piñas City.

The COA, according to the BMP, declared as illegal P151 million or 89.9 percent of the disbursements to the Villars’ soft projects.

The COA also noted that the questionable soft projects of the Villars did not comply with the requirements of Republic Act No. 9184 or the 2003 Government Procurement Reform Act.

RA 9184 provides for the creation of an electronic database—the Philippine Government Electronic Procurement System (Philgeps)—requiring the registration of companies wishing to enter into government supply contracts. The registry would be used by all government agencies and firms to check suppliers’ track records and to blacklist those who do not comply with their obligations or are otherwise found wanting in their obligations.

Among the documents that the Villars failed to submit, which the COA noted, were: Printouts of copies of advertisements, notices of award, notices to proceed and contracts on the Philgeps website; printouts of advertisements on the Las Piñas City website; certifications by the head of the bids and awards committee secretariat of Las Piñas City as to the posting of the advertisements in conspicuous places; and, in applicable cases, proof of publication in newspapers of general circulation.

“Even if the projects were completed and the intended beneficiaries actually received the benefits they needed, the mere failure to abide by the requirements of RA 9187 made the entire disbursement illegal,” the BMP said.

Tupas, on the other hand, was accused of siphoning more than half a billion pesos to NGOs headed by Roque.

“Because of his (Tupas’) irregular assistance to the people tagged by the COA as the Godofredo Roque group, Roque and the people around him got P558 million through made-up projects. Aside from this, Tupas also admitted to the COA that he signed the documents that gave the Roque NGOs the power to obtain public funds via his (Tupas’) special allocation release orders,” De Guzman said.

Tupas is the House committee on justice chair and secretary general of the Liberal Party led by President Aquino. He was the lead prosecutor in the impeachment trial of Chief Justice Renato C. Corona.

In a statement, Sen. Cynthia Villar said the local government of Las Piñas had already corrected the deficiencies noted by the COA.

“The audit findings on our PDAF releases to the implementing agency, which in this case was the local government of Las Piñas City, were typical findings on internal control procedures,” she said.

She added that the city government “has complied with most of the recommendations of the COA as well substantially submitted the documentary requirements for all transactions.”

For his part, Tupas in a text message said: “I’m not in any way involved in any scam … that issue came up in the COA report. However, in the same COA report it states that I informed the COA in 2009 and 2010 that my alleged signatures regarding the request, implementation and liquidation were forged and spurious so I asked them to investigate it as early as 2009 and I also wrote the DA agency concerned at that time to stop the implementation of the project and to withhold payment. I took those steps at the earliest possible time to make sure that no part of the PDAF will be misused by any agency.” With a report from Gil Cabacungan
RELATED STORIES: