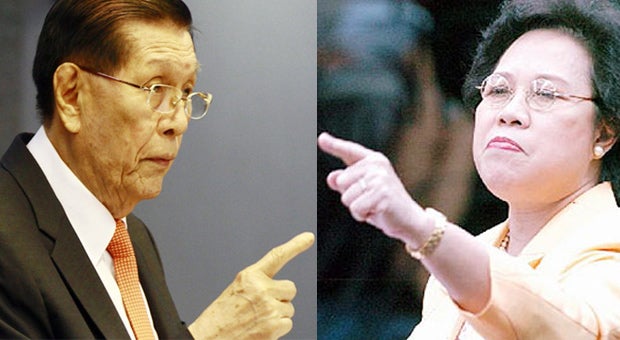 Senate Minority Leader Juan Ponce Enrile will answer the charges against him in connection with the P10-billion pork barrel scam and comply with the Ombudsman’s order that the respondents in the case file their counteraffidavits and controverting evidence.

“Senator Enrile maintains his innocence and his determination to cooperate fully with the Ombudsman to bring to justice all those who are truly responsible for this scam,” said Enrique de la Cruz, Enrile’s lawyer, adding that the senator had already received the Ombudsman’s order.

Enrile’s fellow senators who have been similarly charged—Senators Jinggoy Estrada and Ramon Revilla Jr.—have yet to receive the order but have repeatedly expressed their willingness to answer the complaint.

All three have denied any wrongdoing in the disbursement of hundreds of millions of pesos from their pork barrel entitlements, which allegedly went to ghost projects and kickbacks, to them.

“I’ve yet to see a copy of the order,” Estrada said Friday. “I will let my lawyer handle it.”

Revilla’s lawyer, Joel Bodegon, said on Thursday night that he had yet to be advised on any subpoena received by his client and could not comment.

Bodegon said that if the DOJ had only given way to the Ombudsman to do the investigation, “as it is mandated by the Constitution, no time should have been wasted and trial by publicity avoided because the fact-finding investigation by the Ombudsman is confidential.”

The Ombudsman said the other day it had begun a preliminary investigation into the case, following a report that a panel had submitted a memorandum to Ombudsman Conchita Carpio Morales recommending the filing of criminal and administrative charges against the respondents.

In the memorandum, the panel also reportedly tagged Enrile the mastermind behind the P10-billion pork scam.

This prompted a response from Enrile on Thursday, in which he claimed that Morales had denied the Inquirer story, which he said was a “fake leak.” He demanded an apology from the Inquirer and that the Ombudsman investigate the supposed leak.

Sen. Miriam Defensor-Santiago on Friday said Enrile was being a “super bully.”

“He knows very well—if he is the lawyer that he publicizes himself to be—that there’s no libel because our Penal Code defines libel as a malicious imputation of a certain condition or status or circumstance. The very quack of libel is malice,” Santiago said in an interview with Radyo Inquirer 990AM.

While the report might have been “defamatory” because it was against Enrile and “tended to uphold his reputation as a crook,” Santiago said the Supreme Court had made some exemptions.

“The general rule is a defamatory imputation is malicious but an exemption to the rule is this—there’s no libel if the subject of the libel or newspaper report is a fair and true report made in good faith. So that’s the question,” she said.

The senator said she believed the Inquirer story was written in good faith since the basis of the story was a report submitted to the Ombudsman’s office with more than 200 pages.

“You can’t publish an entire 230-plus page report. Nobody does that,” she said.

“So you’re free to pick and choose as long as you’re quoting what the report says and you’re not making editorial remarks about it. Enrile knows there’s no libel there,” she said.

Besides, Santiago said, the idea that Enrile masterminded the scam was “already ‘catching fire,’ to use the title of a movie.”

“It’s catching fire in ‘The Hunger Games’ movie in that because of the money he stole, millions of Filipinos have been left hungry. Not just him, also his coaccused,” she said.

With the Ombudsman’s order for Enrile and the other respondents to answer the charges against them, Santiago said the antigraft body had in effect adopted the panel’s report and findings.

Enrile’s media staff on Friday said the senator would not be answering Santiago’s remarks.