Tent city for Yolanda victims to rise in Cebu – Gordon 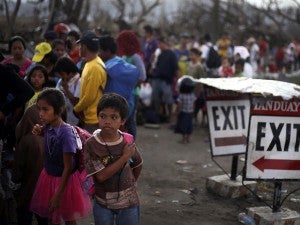 Typhoon Haiyan survivors queue up to get into any evacuation flight at the airport in Tacloban.  AP

MANILA, Philippines – The tent city the Philippine Red Cross plans to put up in Cebu will also provide water, electricity and livelihood for Typhoon Yolanda survivors.

In an interview on Radyo Inquirer 990AM, Red Cross Chairman Richard Gordon said that as soon as necessary documents have been secured from the private developer and owner of the four-hectare land that would be used for the camp site, about a thousand tents would be put up to shelter thousands of people who lost their homes due to the monster typhoon.

“This is temporary while the old homes are being cleared of debris,” Gordon said.

He said these tents would be more comfortable place to live in, compared to those that don’t have water and electricity.

In an earlier statement, PRC said a similar tent city would be put up in Leyte.

It said a portion of the camp sites would be used as venue for livelihood training for the evacuees.

“We will get a ship and will evacuate anyone who wants to evacuate. We are now setting up base camps in Cebu and Leyte. These people need to have dignity. And be able to take charge of their lives and be given the chance to rebuild their community,” Gordon said.