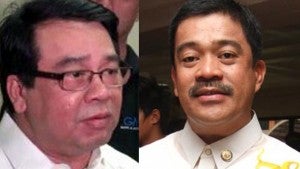 DAVAO CITY, Philippines – Militant lawmakers have asked Malacañang to apply for a debt relief, saying the money saved from debt servicing would do a lot in the relief and rehabilitation efforts for disaster-hit areas, including provinces recently ravaged by Yolanda.

Bayan Muna Representatives Neri Colmenares and Carlos Zarate said in a joint media statement that the Aquino administration should “ask for debt moratoriums at the minimum or a debt write off at the maximum.”

“So that the country would be given ample funds and time to rehabilitate,” they said.

The militant lawmakers said for the year 2013 alone, the total foreign borrowings hit P2 trillion and the budget for debt servicing would be P333.9 billion.

“We should review the national budget and see if we can free more funds intended for debt servicing so that these can be rechanneled to the rehabilitation of devastated areas. Cases in point are the debt management fund which is P85.18 billion and the international commitments fund which is P4.8 billion,” Colmenares said.

He said from his calculations, the national government would be able to raise P125 billion by suspending its foreign debt obligations, which “would go a long way in the long term rehabilitation of areas affected by calamities.”

Colmenares said the savings would be so huge that it would not only benefit Yolanda victims but also those displaced by the Bohol earthquake and typhoon Pablo.

“We ask foreign and local banks to write off the interest payment of P333.9 billion for the year and to declare a moratorium on the principal payments. The international community should understand that we need all the funds we have to help our countrymen rise up as soon as possible and we hope that other countries would support our call,” Colmenares said.

Zarate said he also welcomed the putting up of a rehabilitation fund as proposed by leaders of the Senate but it should be scrutinized to ensure it would not become just another source of pork barrel.

He said the rehabilitation efforts were so huge that the government would need at least P100 billion in funds.

“Aside from the rehabilitation of roads, bridges, schools, hospitals and other infrastructure this fund must also be used for housing and livelihood projects for the comprehensive effort to help our countrymen,” Zarate said.

He said the auditing for the fund should also be very strict to ensure that it would go to the people and not to the pocket of some lawmakers.

“At any rate we must ensure that this proposal will not be used to make another form of pork barrel because many unscrupulous politicians are now using the Yolanda disaster to justify and still retain the graft-ridden pork barrel system,” Zarate said.

As this developed, the International Committee of the Red Cross said it has started reaching remote areas in Samar – particularly Guiuan, Mercedes and Salcedo – where Yolanda swept away shoreline communities.

Pascal Mauchle, head of the ICRC delegation in the Philippines said that as of Tuesday, the aid group has already provided food assistance to more than 50,000 people.

“This is only the start,” he said.

“We’ll distribute food and other essential items including tarpaulins, blankets, mats, towels, jerrycans and hygiene items for 8,500 people,” he said.

Mauchle described Guiuan, where nearly 48,000 people lived before Yolanda, as among the hardest hit places in Visayas, where “most structures were massively damaged and the population was cut off from vital supplies.”

“Over the past week, ICRC staff have been working around the clock in Samar to get some basic infrastructure operating. They have also assessed the most pressing needs: food, safe drinking water and basic health care,” Mauchle said.

Aside from food, Mauchle said the ICRC and the Philippine National Red Cross have started distributing medicines such as antibiotics and painkillers to devastated areas in Visayas.

“For its relief operation in response to typhoon Haiyan in Samar, the ICRC has launched an initial appeal for CHF15 million (over $16 million) to aid 180,000 people for a period of three months,” he said.

The Japanese government on the other hand, through the Japan International Cooperation Agency (JICA), said it has recently turned over relief items worth ¥60 million to the towns of Basey and Guiuan in Samar; Palo, Tanauan, San Isidro, Ormoc; and Tacloban City in Leyte.

The distribution of goods to other remote towns will continue for the rest of the week, according to JICA chief representative in the Philippines, Takahiro Sasaki.

“We are determined to help the typhoon victims get back on their feet, and recover from this tragedy in ways we can,” Sasaki said.

He said aside from the basic needs, the Japanese government also dispatched medical personnel from the Japan Disaster Relief Medical Team to provide medical assistance to the victims.

Read Next
Filipino militants abduct provincial treasurer
EDITORS' PICK
Geek out at TOYCON 2022 powered by Smart Signature
UK’s Boris Johnson will resign, BBC reports
High inflation: Your P1 is now worth only 87 centavos
High-risk pregnancy: Reducing your risk is in your hands
Unemployment rate up to 6% in May
House energy committee chair Arroyo bats for cheap electricity
MOST READ
Suspect in grisly killing of missing woman in Bulacan arrested
Kim Atienza’s daughter flaunts bikini body in response to critics of her ‘revealing photos’
Cop slain in Isabela ambush
FDA probes popular Filipino noodle brand for ‘high level of ethylene oxide’
Don't miss out on the latest news and information.