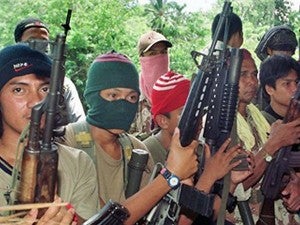 MANILA, Philippines — Abu Sayyaf militants barged into a government compound in the southern Philippines and abducted the provincial treasurer in a daring attack, a military official said Tuesday.

Two police bodyguards opened fire but failed to stop the abduction after they were overwhelmed by up to 10 Abu Sayyaf militants, who snatched Jesus Cabilin late Monday in his quarters in the provincial capital compound in Sulu province, military commander Marine Col. Jose Cenabre said.

The militants, who were armed with assault rifles and pistols, fled in a van with Cabilin.

The brief exchange of fire between the militants and Cabilin’s police guards alarmed Cenabre and other officers, who were at the provincial military headquarters about 1 kilometer (less than a mile) away.

“I deployed a tank,” Cenabre said. “I thought the provincial capital was under attack.”

The militants fled before additional troops arrived. It was the second attack by suspected Abu Sayyaf gunmen in recent days, after two Abu Sayyaf militants on a motorcycle lobbed a grenade that killed a marine and wounded two others in Sulu’s Jolo town on Sunday.

The militants now hold about 17 captives in their jungle strongholds in predominantly Muslim Sulu, including two European bird watchers and a Jordanian journalist who were kidnapped last year.

While Abu Sayyaf abductions still occur, they are far fewer today than the massive kidnappings that terrorized Sulu and outlying provinces in the early 2000s, when the group had many commanders and strong ties with terrorist organizations, including Indonesian-based Jemaah Islamiyah.

U.S.-backed military offensives have crippled the Abu Sayyaf in recent years, but it remains a key security threat. Washington lists the group as a terrorist organization.