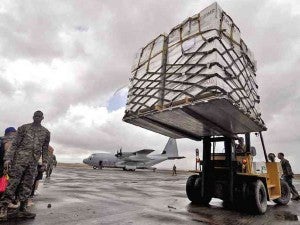 US Marines unload relief items from a cargo plane at the Tacloban airport on Thursday. President Aquino was under growing pressure to speed up the distribution of food, water and medicine to desperate survivors of Supertyphoon “Yolanda.” INQUIRER FILE PHOTO

MANILA, Philippines – The Department of Budget and Management (DBM) on Monday launched the Foreign Aid Transparency Hub (FAiTH), a website that allows the public to monitor the amount of foreign assistance pouring into the country following the onslaught of super typhoon “Yolanda” (international name Haiyan).

Budget and Management Secretary Florencio “Butch” Abad, in a televised press conference, presented the new website, which is expected to bolster transparency and accountability efforts of the administration.

The announcement came days after relief started pouring in for victims of Yolanda. With almost 4,000 people killed and tens of thousands left homeless, other nations and international bodies immediately sent relief goods and medical teams, in addition to pledging millions of dollars for the benefit of the survivors.

“There’s an urgent call now for us to monitor the movement of foreign aid funds for Yolanda so they will go exactly where they’re supposed to: to the survivors of the typhoon for whom recovery will be a long and arduous process, and to the communities that need to be rehabilitated as quickly and efficiently as possible. FAiTH is the Aquino administration’s pioneering response to this growing need for transparency and accountability in the management of humanitarian donations,” said Budget Undersecretary Richard “Bon” Moya in a statement.

Accessible through http://www.gov.ph/faith , the website lists down all the pledges of donor countries and parties. It also specified the conduit and government agency where the donations will be coursed through.

“We believe that other humanitarian organizations and civil society groups want the very same things that this Administration is working for: greater transparency and accountability in the use of funds, especially those that are meant to bring relief and urgent assistance to the victims of calamities,” Abad said.

In a separate statement, President Benigno Aquino III said, “Ultimately, FAiTH is more than a hub of information: it is an expression of appreciation for the kindness of those who stand in solidarity with our countrymen, and it is a continuation of our promise to the Filipino people: we are here only to serve you.”