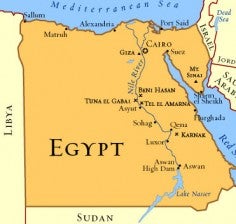 He said the number of dead may rise but that all victims had been cleared from the scene.

A security official said the train was traveling from the southern city of Beni Suef when it hit at least three vehicles, including a small bus, near the village of Dahshur, about 40 kilometers (25 miles) south of Cairo.

The official spoke on condition of anonymity because he was not authorized to brief reporters.

Nile News TV quoted security officials as saying the crossing gates of the tracks had been closed and the train’s driver was surprised to see vehicles still crossing.

Egypt is notorious for train collisions and has a poor safety record that is mostly blamed on decades of badly maintained equipment.

Last year, a train crashed into a bus, killing 51 children traveling to school in the governorate of Assiut, some 200 miles (320 kilometers) south of Cairo. The transport minister and the head of the railways resigned following the accident.

The crash also gave ammunition to opponents of then-President Mohammed Morsi who said he had done little to improve lives of ordinary Egyptians. Morsi was ousted in a military coup in July.