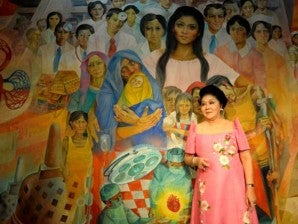 Former First Lady Imelda Marcos on Friday issued a handwritten statement offering her condolences to the families of those who died in Leyte, her home province, due to Supertyphoon “Yolanda,” after finally learning about the extent of the devastation from her children.

Marcos was admitted to the St. Luke’s Medical Center in Taguig City on Nov. 3 due to high blood sugar levels, an Inquirer report said.

Her prolonged absence had surprised typhoon survivors, who had complained about the slow pace of aid reaching the devastated islands.

Her children, Ilocos Norte Gov. Imee Marcos, Sen. Ferdinand “Bongbong” Marcos Jr. and Irene Marcos-Araneta, had tried to keep the information on the devastation in the Visayas from their mother because of her condition.

But they were forced to tell her about how the Visayas islands were ravaged on Friday, said June Arvin Gudoy, chief of the communications and media office of Governor Marcos.

Gudoy said Marcos had been advised by her doctors to stay in the hospital “for medical monitoring and treatment for her diabetes.”

But the lawmaker demanded to be flown immediately to Leyte, when her children informed her about the calamity, but was later persuaded to stay and continue her treatment, Gudoy said.

Aquino back to Ground Zero on Saturday