MANILA,Philippines—CNN broadcast journalist Anderson Cooper urged news anchor Korina Sanchez to go to Tacloban, the hardest hit by one of the worst typhoons in history, since she has the means “as she is the wife of the Interior Secretary.”

In a live broadcast on Friday morning, Anderson clarified that his previous reports merely showed the situation in Tacloban as it was and not to attack the government for its lack of presence in the desolate Leyte province.

“I urge her to go there (Tacloban). I’m sure she has the means as she’s the wife of the Interior Secretary. Her husband’s a politician, I’m sure he can arrange her a flight,” said Cooper, referring to Manuel “Mar” Roxas II who is at the forefront of relief operations for victims of Supertyphoon “Yolanda”. 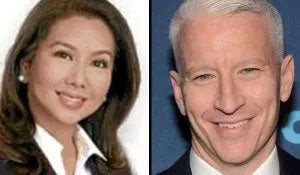 But a day after she drew the ire of netizens in social media for criticizing the CNN reporter, Sanchez went to Ormoc, also in Leyte, to make an on-the-spot report in the city, which is about 105 kilometers from Tacloban City.

Recapping his controversial report that Sanchez had criticized, Cooper replayed a clip of his previous CNN report in the Friday broadcast:

“Here’s what I actually said: As for who exactly is in charge of the Philippine side of operation, that is not really clear. I am just surprised. I expected on this day five, I thought I may have gotten here very late, that things will be well in hand, it does not seem like that. People are desperate, they do not have any place for shelter, it’s very difficult for people to get food,  neighbors are helping out neighbors, water is in short supply, it is a very very bad situation here.”

Cooper  also pointed out the lack of medical supplies, food and water in clinics set up at the Tacloban airport.

“If any clinic in the entire disaster zone should be able to receive aid quickly and easily, it’s the clinic at the airport and they were not getting it.”

Cooper has been covering the disaster in Tacloban City where Yolanda’s fury was heavily felt as it leveled buildings, smashed homes, toppled trees and posts and killed and injured thousands.