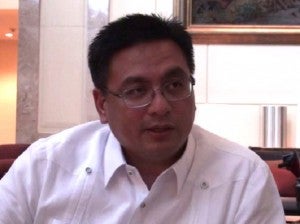 MANILA, Philippines—Customs Commissioner Ruffy Biazon ordered the release of 90 containers of smuggled rice seized earlier at the Subic Freeport in Zambales to help the government’s relief efforts for the victims of Supertyphoon “Yolanda.”

In separate letters to Social Welfare Secretary Corazon Soliman and Defense Secretary Voltaire Gazmin, both dated Nov. 11, he said the illegally imported rice shipment was “initially intended for the victims of Typhoon ‘Pablo.’”

“However, to date, the forfeited goods are still in the custody of the Port of Subic and under the risk of contamination due to their perishable nature,” Biazon disclosed.

The shipments have been impounded for almost a year and a half.

“In view of the recent onslaught of Supertyphoon Yolanda, which left thousands of people in Eastern Visayas in need of basic necessities, these containers of rice are hereby offered for donation to the victims of the calamity,” Biazon said.

Biazon urged both the Department of Social Welfare and Development (DSWD) and the Department of National Defense to coordinate with Subic District Collector Lucy Medina “for the prompt processing and release of the relief goods.”

The impounding of these rice shipments was not contested in court, according to the Bureau of Customs (BOC) officials.

The BOC, he also said, “will make an inventory of the seized and abandoned goods in the ports to determine the availability of items we can donate under existing rules and regulations.”

Last weekend, the former Muntinlupa City legislator told the Inquirer the BOC would release millions of pesos worth of impounded rice and other food items, as well as construction materials and used clothing to help the government’s relief efforts for the typhoon victims.

He said the items were being prepared in various ports nationwide to be turned over to the DSWD.

In a related development, the BOC will set up “one-stop shops” at the ports of Tacloban City, Cebu City and the Ninoy Aquino International Airport to expedite the processing and release of all donated relief goods from abroad.

Biazon said “the one-stop shops would enable the bureau to facilitate the timely release of all foreign relief goods and other donations.”

“They shall be open 24 hours, seven days a week. They shall be responsible for coordinating with other concerned government agencies in the processing and documentation of donated relief items and equipment for release within 24 hours from the filing of their import entry papers,” he added.

The BOC head pointed out “the three international ports are the most strategic and closest ports to the calamity areas. Hence, these are ideal staging points for the supply chain of relief goods and donations from the international community.”

In a statement, he noted “the typhoon victims in central Philippines have already suffered a lot. Many of them lost their loved ones, homes and to some, even hopes.”

“To help them cope with the tragedy, the government is doing everything to get much-needed relief goods to them at the soonest possible time,” Biazon said.

Read Next
Ako Bicol party list sending heavy equipment to Leyte, Samar
EDITORS' PICK
On Day 2 of implementation, gov’t says workers now exempt from ‘no vax, no ride’ policy
Gear up and get ready to play with Yamaha Mio Gear
DOH: 28,471 new COVID-19 cases in PH; active cases now 284,458
Metro Manila posts lowest temperature yet this ‘amihan’ season at 19°C
Over 3 Million worth of prizes to be won at Smart Padala’s SENDali Manalo Promo!
Acer starts the year off strong with the Aspire Vero National Geographic Edition
MOST READ
Emma Stone calls Andrew Garfield a ‘jerk’ after he ‘lied’ about his ‘Spider-Man: No Way Home’ appearance
LOOK: Edu Manzano, Cherry Pie Picache enjoy Palawan with her son Nio Tria
Unvaccinated has rights but it has limits—DOJ
Retirements prompting major reshuffle in PH military
Don't miss out on the latest news and information.