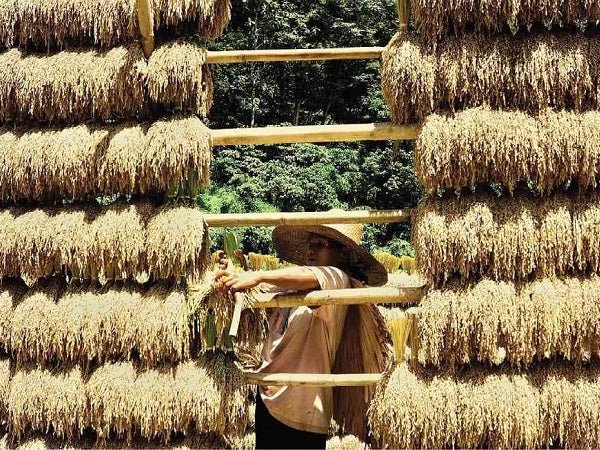 GOLDEN GRAINS Without machines and modern drying facilities, a farmer in Kalinga province dries stalks of palay under the sun by hanging these on bamboo poles. Kalinga is among the top producers of traditional rice varieties in the Cordillera region. EV ESPIRITU

Whenever the rice supply situation is brought up in conversations, two grave misconceptions are at once entertained by the public.

The first is that although the country is an agricultural domain teeming with resources apt for rice production, it fails in total output compared to neighboring rice-exporting countries.

The second is that Filipino rice farmers are poor students of agriculture in a country noted for top rice research and development institutions and agricultural universities.

Indeed, as government records show, the country is noted for its history of rice insufficiency, with only a few years of exception. The years of abundance, which led to rice exportation, were from 1838 to 1842 and from 1977 to 1980.

Rice importation was the convenient way to fill the gap in production and utilization. In 1998, the country registered the largest importation of more than 2 million metric tons (MT) of rice, records show.

But what are the realities in rice production in the country? Are our farmers really poor students of agriculture?

“Our rice farmers are top producers per unit area per unit time,” says Dr. Eufemio Rasco Jr., executive director of the Philippine Rice Research Institute (PhilRice) based in the Science City of Muñoz in Nueva Ecija province. “Comparatively, they can be given the highest honors if they were students,” he adds.

According to him, the Philippines registered a higher growth rate in terms of rice production compared to China, India and Thailand.

Scientists and researchers from PhilRice’s impact evaluation, policy research and advocacy program studied the Philippine rice industry and came out with data to better understand the industry.

However, this high harvest in 2008 was followed by a decline in production. In 2010, the country posted a total harvest of only 15.77 million MT, which was 6.2 percent lower than the 2008 production.

The harvest declines were attributed to the El Niño weather phenomenon, characterized by the dry spell, in the first half of that year, and strong typhoons in the latter part.

Sustained rice self-sufficiency is an earnest target. But PhilRice scientists acknowledge that it is difficult to achieve as consumption keeps increasing due to rising population and with production failing to measure up.

But is rice self-sufficiency a hopeless dream?

“Our national average [rice] yield in all ecosystems, which is 3 to 4 MT per hectare, is not even half of the scientifically attainable yield of good seeds of modern inbred rice varieties used for planting,” PhilRice says. “Yields of 6 to 7 MT per hectare were attained in on-farm demonstration trials that used good seeds and employed good crop management practices.”

“Good seeds” are produced from varieties not yet approved by the National Seed Industry Council, PhilRice scientists say, but these have met the standards prescribed by the certifying agency.

Aside from good seeds, the other factors that affect yield relative to research and development are integrated crop management and mechanization, infrastructure (irrigation, farm-to-market roads, transportation and postharvest), extension and environmental factors.

The cost of palay production is also high. Labor accounts for 45 percent; pesticides, 17 percent, and other production costs like fertilizers and soil improvement, machine rentals, irrigation, interest on payment of crop loans, fuel, food and transportation, from 4 to 8 percent each.

PhilRice says at least 89 percent of the total rice harvest goes to the domestic food supply while 6 percent accounts for wastage, 3 percent goes to processing and 2 percent to seed production.

“Given the data on resources, rice production, per capita consumption, wastage and other factors, if managed well, there is no reason why the country cannot attain and sustain rice self-sufficiency,” Rasco says.

Barring calamities, like strong typhoons that would hit rice production areas, Rasco and other PhilRice scientists and agriculture officials believe that the country’s target of rice self-sufficiency is achievable.