No spotlight on Iloilo, but tragedy as staggering | Inquirer News

No spotlight on Iloilo, but tragedy as staggering 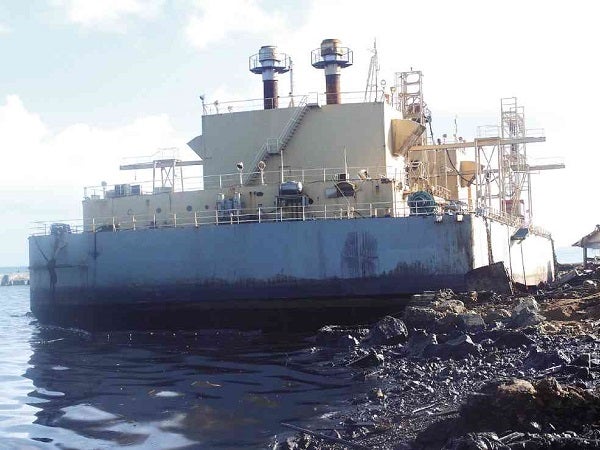 THE NAPOCOR power barge that was detached from its moorings by storm surge and slammed into communities along the coastline of Estancia, Iloilo NESTOR P. BURGOS/INQUIRER VISAYAS

ESTANCIA, ILOILO—Margie Molina’s mission is clear to her.

“I just want to find my husband and bring him home,” she said.

She kept praying, however, that her search would not end in the morgue of the Crisme Funeral Services where 20 bodies of those who died in the wrath of Supertyphoon “Yolanda” lay unclaimed.

As Margie searched for her husband, Eliseo, she was told to check the municipal cemetery where mass graves were being dug for bodies that are starting to rot.

She heeded the advice, proceeding to the cemetery with Edgie Francisco, who is looking for his father, Eduardo.

Margie’s thoughts revolved around fear—that her husband is gone. She would not know how to care for three children —aged 8, 7 and 4—alone.

Eliseo and Eduardo are crewmen of a fishing boat, “Segundo Wheeler,” that sank off Apad Bay here at the height of Yolanda on Friday.

The boat was brought to the bay for shelter but winds of more than 200 kilometers per hour lifted it off the water and threw it around like a small toy, according to Margie, quoting survivor accounts.

Estancia, 153 kilometers northeast of Iloilo City, was among the towns in Iloilo worst hit by Yolanda.

Town officials reported the recovery of 71 bodies on Monday, or more than half of 133 fatalities in the province.

Unclaimed bodies, including at least 25 fishermen believed to be from Masbate, had been buried in a mass grave on Sunday. The fishermen died after waves from a storm surge lifted their boats, anchored in this town’s port, off the water and slammed them into the port.

At the coastline, the smell of decomposing bodies mixed with the odor of diesel. A hand, unmoving, stuck out of the debris.

The storm surge broke moorings of a power barge of the National Power Corp. (Napocor) and slammed the barge against the coastline crushing several houses. Residents said bodies are still pinned under the barge.

The barge leaked a still undetermined volume of diesel coating the coastline and threatening the health of residents and marine life.

The barge has a maximum capacity of 1.2 million liters of diesel, according to James Abayon, Napocor maintenance officer.

Coast Guard personnel were trying to stop the spill with booms.

Estancia Mayor Cordero said authorities did not know where to evacuate the residents because even schools and other government buildings had been destroyed.

The town, known as “Alaska of the Philippines” because of its seafood industry and popularity as a fish trading center, has been paralyzed with electricity and communication cut off.

The first batch of relief goods started to arrive Sunday afternoon, two days after the supertyphoon struck, because roads were blocked by fallen trees and electric posts.

Only a few roads have been cleared as town officials grappled with the overwhelming destruction and the number of residents seeking help. Many villages remain inaccessible.

Residents had been dependent on two water refilling stations for potable water and food is running out.

“At least 99 percent of houses and other structures were destroyed or damaged,” said Mayor Cordero.

Several other northern towns of Iloilo have been devastated and are desperate for food, water and shelter. Most of the province is still without electricity and communication.

The delivery of relief goods has been hampered by impassable roads, with many portions of the national highway from Iloilo City littered with fallen trees.

Stretches of roads are blocked by fallen electric posts. Many residents, who lost homes and are staying on the streets, use power lines to hang clothes.