For Boholanos: After super quake, a super typhoon 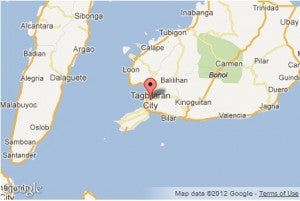 Anhao and her two daughters Novem Grace, 6, and Princess Ariane, 9, have been evacuated twice in less than a month.

They were forced to live in a tent after their house in Loon was destroyed by the 7.2- magnitude earthquake on October 15.

Last Thursday, they were among those gathered by local officials and brought to the capital, Tagbilaran City, as provincial officials prepared for the passage of Supertyphoon Yolanda.

“I hope there would be no more calamities. We no longer have a house and yet we have been hit by a typhoon. I hope Yolanda would be the last,” she told the Inquirer.

Bohol still had a very long way to recover from the earthquake that killed more than 200 persons and destroyed or damaged both public and private buildings and thousands of homes.

In less than a month, it was hit by two typhoons: Typhoon Wilma last week, which triggered floods and Supertyphoon Yolanda on Friday.

The typhoon sent more than 40,000 people back to various evacuation centers and set back rehabilitation efforts in the province.

Among the evacuees were Anhao and her girls.

Anhao told the Inquirer that she still had to rebuild her house, which was destroyed by the earthquake.

She said they had been staying in a tent near the rubble of her home when they were asked to leave on Thursday because their area had several underground caves that could collapse if the ground were softened by heavy rain brought by the new typhoon.

They hastily gathered some clothes and blankets before boarding the truck sent by Loon Mayor Lloyd Lopez.

They, along with 26 other families, arrived at the Dr. Cecilio Putong National High School in Tagbilaran City about 6 p.m.

Anhao said her daughters asked her where they were going when they boarded the truck because they were still afraid of the aftershocks.

“My children were scared but I told them this would be over soon,” she said.

Anhao’s husband, Arthur, works in a factory in Manila but he would call her every now and then to check on them.

“Our house is gone. Our belongings are gone. As long as my children are okay, we will be able to overcome this,” Anhao said.

The Provincial Social Welfare and Development office in Bohol said 42,435 evacuees were staying in 362 evacuation centers during the onslaught of Yolanda on Friday.

“They have prepared well. Evacuees from the towns who came to Tagbilaran City like Loon and Catigbian residents were provided by the provincial government,” she told the Inquirer in a text message.

One person was reported missing while another was wounded during the typhoon, the PSWD said.

Raffy Pelonio of Aklan disappeared into the surf after the eight other crewmen jumped off a barge that had run aground off the town of Guindulman town on Friday. The seven other crew members were rescued along with the eight member crew of another barge.

Meanwhile, Bohol was still without power Saturday due to the typhoon, which destroyed more than 27 houses and uprooted 48 trees. Many of the houses in Bohol were either destroyed or damaged by the earthquake.