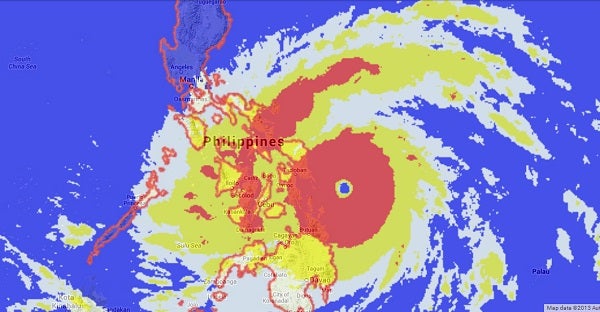 MANILA, Philippines—Supertyphoon “Yolanda” (international name: “Haiyan”) made landfall as early as 4:30 a.m. Friday in Guiuan, Eastern Samar. It was earlier expected to land at 5 a.m.

In its 5 a.m. weather bulletin, the Philippine Atmospheric Geophysical and Astronomical Services Administration (Pagasa) said Yolanda was observed 62 kilometers southeast of Guiuan, packing maximum sustained winds of 235 kilometers per hour near the center and gustiness of up to 275 kph.

Washington Post described Yolanda as “among the most powerful storms witnessed anywhere in modern times.”

Storm signals were raised in more areas, according to Pagasa:

Yolanda is expected to traverse the provinces of Biliran, the northern tip of Cebu, Iloilo, Capiz, Aklan, Romblon, Semirara Island, the southern part of Mindoro then Busuanga and will exit the Philippine landmass early Saturday toward the West Philippine Sea, Pagasa said.

Sea travel remained risky over the seaboards of northern Luzon and over the eastern seaboard of Central Luzon.