100 sinkholes found in Bohol after quake 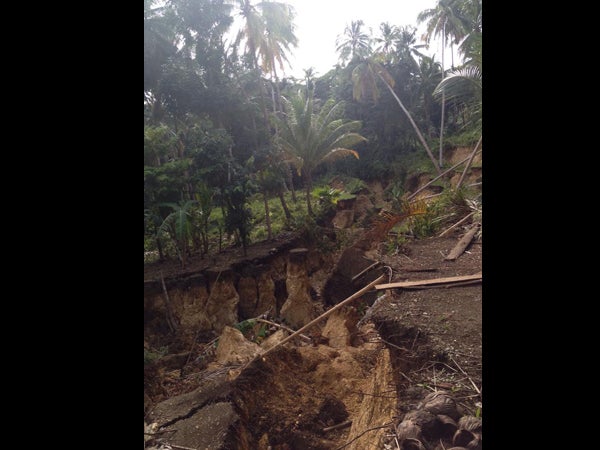 A family of four died in this sinkhole in Antiquera, Bohol. Contributed Photo Paula Cacho

TAGBILARAN CITY, Philippines—Close to 100 sinkholes have been discovered in nine towns and one city in Bohol after the 7.2-magnitude earthquake that shook the province on Oct. 15.

Environment officials said not all of the sinkholes posed dangers to the public as long as no houses were built over them.

In Poblacion Uno village in the capital Tagbilaran City, however, 200 families were asked to leave their homes, as the structures were built on the roof of a sinkhole.

A sinkhole is a vacuum or cavern beneath the ground or topsoil waiting for an occurrence (earthquake or heavy rain) to rupture.

Bohol Gov. Edgar Chatto said a team from the Mines and Geosciences Bureau (MGB) was assessing the sinkholes to determine which ones posed a threat to the public.

The eight-member team is using a ground-penetrating radar to map the island for sinkholes.

Chatto said the mapping would be completed by the first quarter of 2014 and then the team would decide whether there was need for engineering intervention.

The sinkholes were found by the Department of Environment and Natural Resources in Central Visayas (DENR-7) in: Tagbilaran City and the towns of Baclayon, Corella, Alburquerque, Panglao, Dauis, Balilihan, Batuan, Loon and Carmen.

Ed Llamedo, DENR-7 information officer, said these sinkholes had been existing as long as 5.3 million years ago but only surfaced after the strong earthquake on Oct. 15 that killed more than 200 persons and destroyed or damaged P5 billion worth of infrastructure, churches, and public and private structures.

Filling the sinkholes with cement will only be advisable after the MGB team gets a complete picture of the sinkhole below, he added.

Llamedo explained that their radar can produce an image indicating the diameter, depth, cave pillar and extent of the sinkholes.

The DENR issued a Geohazard Threat Advisory on Oct. 28, recommending the preemptive evacuation of 200 families whose houses were built on the cave roof of the sinkhole found in Poblacion Uno in Tagbilaran City. The sinkhole already ate up an interior road.

Scores of sinkholes found in Bohol