Scores of sinkholes found in Bohol 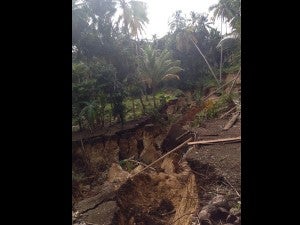 A family of four died in this sinkhole in Antiquera, Bohol. Contributed Photo Paula Cacho

TAGBILARAN CITY, Philippines—Close to 100 sinkholes have been discovered in nine towns and one city in Bohol, whose name is derived from the local word for hole,  following the magnitude 7.2 earthquake that devastated the province on October 15.

Not all of these sinkholes posed a threat to the public unless houses or other structures were built directly on top of or very near them, environment officials said.

This was the reason why 200 families in the Poblacion Uno area of Tagbilaran City, the provincial capital, were asked to evacuate. Their homes were found to have been built on the roof of a newly discovered sinkhole.

Bohol Governor Edgar Chatto said an eight-member team from the Mines and Geosciences Bureau was assessing the sinkholes with the use of ground-penetrating radar or GPR to identify those that pose a threat to the public.

If any engineering intervention is required to make an area safe, Chatto said, it would have to wait for a map of the sinkholes to be completed  by the first quarter of 2014.

“Don’t worry… Bohol is a very safe place to stay,” he told reporters on Friday. “Let us listen to the scientists and experts.”

The regional office of the Department of Environment and Natural Resources in Central Visayas has identified nearly 100 other sinkholes in nine other municipalities in Bohol apart from the one in Tagbilaran.

He said these sinkholes had been existing as long as 5.3 million years ago but surfaced only after the October 15 earthquake that killed more than 200 persons and destroyed or damaged roads and bridges, churches  and many public and private buildings as well as houses. The destruction has been tentatively estimated at P5 billion.

The name Bohol is derived from the local word “bo-ho,” which means hole.

Llamedo urged local officials to undertake forced evacuations where necessary, monitor the sinkholes, put up signs alerting the public to their existence and to cordon off open sinkholes.

Filling the sinkholes with concrete would not be advisable before the MGB gets a complete picture of the extent of a sinkhole, he said.

Llamedo explained that their GPR equipment has the capability to produce an image of the diameter, depth, cave pillar and extent of the sinkholes.

The DENR issued a Geohazard Threat Advisory on October 28, recommending the preemptive evacuation of 200 families whose houses were built on the cave roof of the sinkhole found in Tagbilaran City that ate up the interior road of Purok 7.

Llamedo said the Tagbilaran sinkhole opening measures about 3 meters by 4 meters  and has a depth of 5 meters.

He said the cave roof was very thin “at 0.5 meters” which might collapse either by additional pressure and weight by settlement or continuous ground shaking caused by the aftershocks.

“There is very high [probability] that the sinkholes will increase in size, so residents are urged to immediately evacuate to safer ground,” he told the Inquirer.

Environment Secretary Ramon Paje has said the provinces of Bohol and Cebu, along with Baguio City, have foundations of solid limestone, which have weathered and carved out naturally through time, making these prone to sinkholes.

He said sinkholes already existed in most areas of Bohol, Cebu and Baguio City, but were just not apparent.

In a lay person‘s view, he said, a sinkhole is a visible, deep depression on the ground. But in geology, “it is a vacuum beneath the ground or top soil waiting for an occurrence (earthquake or heavy rain) to rupture.”

According to the US Geological Survey Web site, “sinkholes are common where the rock below the land surface is limestone, carbonate rock, salt beds, or rocks that can naturally be dissolved by groundwater circulating through them. As the rock dissolves, spaces and caverns develop underground.”