There’s ‘opportunity in tragedy’ in Bohol 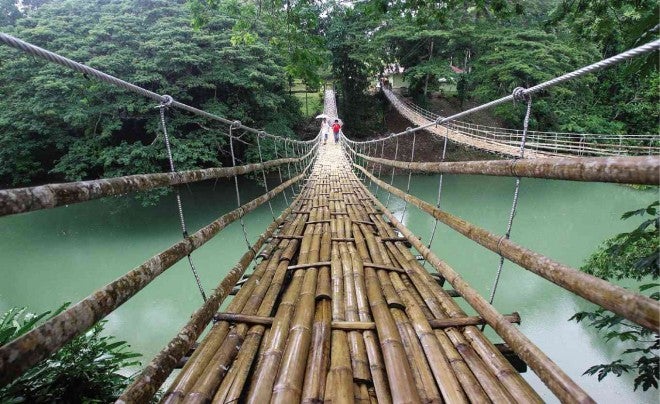 This hanging bridge over Sipatan River in Sevilla, Bohol, looks deserted after the powerful earthquake that hit Bohol on Oct. 15. Bohol officials are hopeful business will rebound as soon as tourists return. MARIANNE BERMUDEZ

“This way to the fault line.”

Wooden signs that carry this message have risen in Inabanga town in Bohol to lead tourists to the fissure in the earth that released the 7.2-magnitude earthquake that brought this province to its knees nearly two weeks ago.

Residents and local officials put up the signs after tourists asked around for direction to Anonang village where they wanted to see how the earth cracked and pushed up a rock face 3 meters high, causing death and devastation in most of the island-province on Oct. 15.

Seeing that there was so much curiosity about the fault line, the provincial officials decided to turn the tragedy into a tourism opportunity by adding the crack in the earth to tours of Bohol.

Bohol Gov. Edgar Chatto said he picked up the idea from geologist Jane Punongbayan of the Philippine Volcanology and Seismology (Phivolcs) who had told him that the Japanese government used the same strategy after the Fukushima earthquake and tsunami of March 2011.

That information and the growing tourist interest in the fault line, Chatto said, led to the decision to make the fracture a tourist attraction to help bring the province back on its feet.

“Bohol still captures tourist interest with its so many other points,” he said. “People would like to see what happened to these churches after the earthquake,” he added, referring to centuries-old churches on the island that the earthquake had reduced to rubble.

Chatto pointed out that some countries in Europe offer the ruins of collapsed buildings as tourist attractions.

He said the ruins of churches and the fault line would now be part of the Bohol tourism product, as these are parts of the province’s history.

The earthquake destroyed six churches in Bohol. These are the churches in the towns of Clarin, Inabanga, Loon, Maribojoc and Tubigon.

Most of these churches were among the oldest in the Philippines and had been declared heritage sites by the United Nations Educational, Scientific and Cultural Organization (Unesco).

The Department of Tourism has announced plans to restore the churches, but Tourism Secretary Ramon Jimenez has also said the restoration will take time and a lot of money.

Malacañang, although keen to see the restoration effort start, has said priority should be given to providing relief to more than 380,000 people displaced by the earthquake.

The Palace on Saturday gave assurance that it has ample funds for relief and rehabilitation after the United Nations flashed an appeal for $46.8 million (P2.1 billion) in international assistance for the people displaced by the earthquake in Central Visayas.

Deputy presidential spokesperson Abigail Valte said the funds were administered by different agencies and could be used only during calamities.

The Department of Social Welfare and Development (DSWD) has roughly P200 million remaining in its quick response fund, Valte said.

And there is about P600 million more in response funds from the Department of Public Works and Highways and from continuing appropriations, she said.

“So we would like to assure our countrymen in Bohol that we have funds that can be mobilized to help in the recovery of Bohol. So let’s not be worried,” Valte said.

Budget Secretary Florencio Abad also gave assurance that the administration was prepared to provide quick relief to the quake-stricken provinces of Bohol, Cebu and Siquijor Island.

Abad said P1 billion from the calamity and contingency funds for 2013 was “ready to support the aid requirements of all affected families and communities.”

He said the calamity fund had a balance of P176 million and the contingency fund, P824 million.

Abad also disclosed that a request had been sent to President Aquino to draw additional calamity funds from government savings.

He said savings from which additional funds could be drawn had been identified but tapping them required approval from the President.

Malacañang appears to be hesitant to support Sen. Juan Ponce Enrile’s proposal for a Central Visayas commission that would handle the rehabilitation of the earthquake-devastated provinces in the region.

Enrile early last week introduced legislation that would create the commission and appropriate P10 billion for assistance, resettlement and development in Central Visayas.

“That has not reached us yet,” Valte said, referring to Enrile’s Senate Bill No. 1872.

But there may be no need for a commission, as the President has already created a task force to handle relief and rehabilitation for Central Visayas, Valte said.

For relief, the DSWD has put to work its food and cash for work programs to help survivors of disasters.

Social Welfare Secretary Dinky Soliman said the programs had been activated to facilitate repair of roads, dikes and drainage systems.

She said the programs were interventions undertaken during disasters to provide food and cash for people in exchange for work in rehabilitation projects.

The DSWD has begun to run the programs in Central Luzon, releasing P2.3 million to help survivors of Typhoon “Santi.”

There is no word, however, when the programs will be put to work in Central Visayas.

In Bohol, life is creeping back to normal, with tourist spending adding to efforts to rebuild the island-province’s economy.

Tourist transport operator Thata Payot said business was slowly picking up since tourists started to come to see the ruins of the old churches as well as Chocolate Hills, especially the mound that  the quake had split into two.

“Business is still a little slow, but if there are requests to see the ruins, we take them there,” said Payot, who rents out a van to tourists for a living.

Payot said he used to have at least five tours week, earning P675 from each tour.

A week after the quake, he said his tours were down to two.

The famous Loboc River Cruise resumed operations on Thursday after the completion of repairs to the piers.

Tourists also continue to come to Panglao Island, known for its white-sand beach and has suffered no damage from the quake.

Provincial Tourism Officer Josephine Cabarrus said there were cancellations of bookings for Panglao, but some of these were moved to later dates.

Cabarrus said it was fortunate that the earthquake happened in October, a lean month for the tourism industry.

“There are not a lot tourists during this month,” she said.

Information from the provincial tourism office showed that the leading foreign tourists to Bohol are Koreans and Japanese, mostly visiting Panglao.

More than a week after the earthquake, the province continues to experience aftershocks, which the Phivolcs said might occur for one or two more weeks.

But the people of Bohol have started to work to bring their lives to normal.

Even in Loon town, the hardest hit in the province, some businesses have reopened.

Maria Lesil Gallo, 36, of Cogon Norte village in Loon, was able to buy eggs, cooking oil, biscuits and soap after she received the money sent to her by her siblings in Manila.

But she and her family still need aid from the government and from private donors, as they cannnot rely on her siblings who have families of their own, she said. With reports from Michael Lim Ubac and Cynthia D. Balana in Manila

Bohol rising from the rubble

In Bohol Aquino sleeps in tent like a Boy Scout again