In Bohol Aquino sleeps in tent like a Boy Scout again 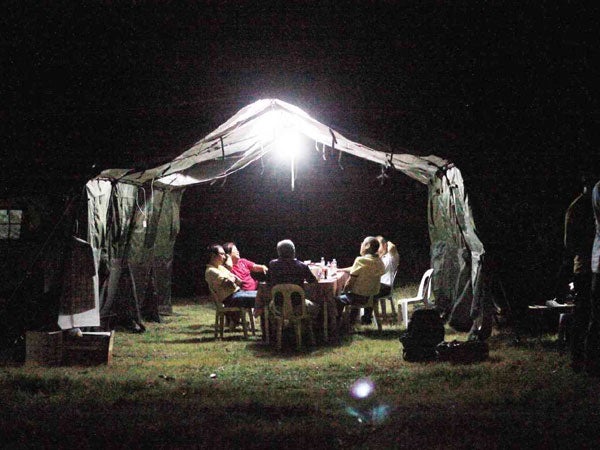 IN THE DEAD OF NIGHT President Aquino holds a Cabinet meeting in an open-air tent in Loon town, Bohol province, where they spent the night on Wednesday. The President distributed relief items and assured residents that there was no reason to fear another earthquake. MALACAÑANG PHOTO

That was how President Aquino found his overnight stay in Moto Sur village in the earthquake-devastated town of Loon in Bohol province on Wednesday.

Trying to make up for his absence last week after a 7.2-magnitude earthquake reduced entire towns in Bohol to rubble, Aquino showed his solidarity with the victims by sleeping among them in a military tent on Wednesday night.

After leading the distribution of relief stocks to evacuees, the President turned in and settled on a cot and tried to sleep, with the night breeze for air-conditioning.

Away from the comforts of his presidential palace, Aquino found the experience like “camping,” remembering his days with the Boy Scouts of the Philippines.

The tent was pitched on a rise overlooking the Lintuan Beach.

“It has a very nice view of the sea fronting Argao and Dalaguete towns in Cebu province,” a local official who asked not to be identified said.

The President’s tent was one of four pitched beneath a big molave tree on the rise, about 300 meters from the highway and 500 m from the evacuation center in Moto Sur, hometown of Budget Undersecretary Mario Relampagos and Loon Mayor Lloyd Lopez.

Sources said members of the presidential staff selected the site and made all the preparations themselves to avoid bothering local officials who had their hands full attending to the evacuees.

At the start, the sources said, the presidential staff members were looking for a house with a yard where the tents could be pitched.

But they could not find such a place, as most houses in Loon had been destroyed by the earthquake. They settled for the rise in Moto Sur, which proved just fine as it had an open space where helicopters could land.

Another source said the amenities were spartan.

The source said a makeshift washroom and rest room were set up near the tents and concealed from the public view with a tarpaulin. Water was supplied by tankers.

The source said she did not know who else slept in the presidential tent, but there were reports that Energy Secretary Jericho Petilla was among them.

The tents had open sides and Aquino appeared to have slept well, except for being shaken by an aftershock in the middle of the night. 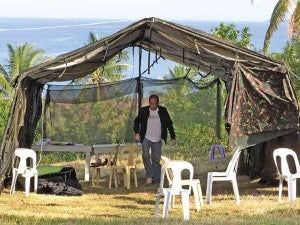 DAYBREAK President Aquino steps out of a tent after spending the night on a narrow cot in the town of Loon. MALACAÑANG PHOTO

“I was able to sleep somehow,” he told reporters in the morning, recalling the aftershock.

“It was really cold so we slept with our jackets on,” he said.

He described the night as a “little vacation.”

The President looked out to the sea and appeared to like the sight of fishing boats coming in with their catch as a sign that life on the island province was creeping back to normal.

Aquino’s decision to spend the night on the island was much appreciated by the residents.

A local official said the President’s overnight presence strengthened the residents’ belief in the statement of the Philippine Institute of Volcanology and Seismology that the island was not in danger from another powerful earthquake.

“I think it helps psychologically. It contributes to regaining confidence that Bohol is safe,” the official said.

Aquino, who had been consulting with Science Secretary Mario Montejo and Environment Secretary Ramon Paje, said the people of Bohol should not be afraid of the aftershocks, which would not be in the magnitude of the main quake because the fault line that generated it had already released all its energy.

The President also tried to ease the residents’ fear of sinkholes, saying the island was being mapped for those holes using ground-penetrating radar.

He said the map would be finished in the first quarter of 2014.

He said he told Gov. Edgar Chatto and other local officials to see if the municipal engineers could work with the Department of Public Works and Highways to determine if the houses remained structurally sound so the evacuees could go home.

Aquino went to Bohol on Oct. 16, but left on the same day and traveled to South Korea on Oct. 17 for a two-day state visit.

That trip cost the government P12 million, an amount that critics said could have been spent for relief in Bohol and Cebu, the two islands that took the heaviest damage from the earthquake.

Presidential spokesman Edwin Lacierda reasoned then that the government had “lots of money” so there were enough funds for relief on both islands.

But many quake victims in Bohol complained that they had not received help from the government three days after the quake and accused the government of being absent at a time of great need on the island.

The victims said that when they finally received aid on the fourth day, it was good for only one day.

Communications Secretary Herminio Coloma said the President returned to Bohol to show his “solidarity” with the quake victims.

“Like a good father, the President reminded the residents of Bohol that the sooner they return home, the sooner their lives will return to [normal],” he said.

The Malacañang communications group released pictures of the President inside the military tent in Bohol and leading the distribution of relief.

Coloma said that as of 9 a.m. on Wednesday, the military had delivered 411,680 kilograms of relief items to Bohol and 36,287 kg had been distributed.

Citing a report from the Department of Social Welfare and Development, Coloma said 186,901 food packs had been given to the quake victims.

“The directive of the President was to complete the distribution of two-week food packs,” he said. “This means that every affected family should receive food that would [last] for two weeks.”

Coloma said the President had ordered authorities to complete the distribution by Oct. 30.