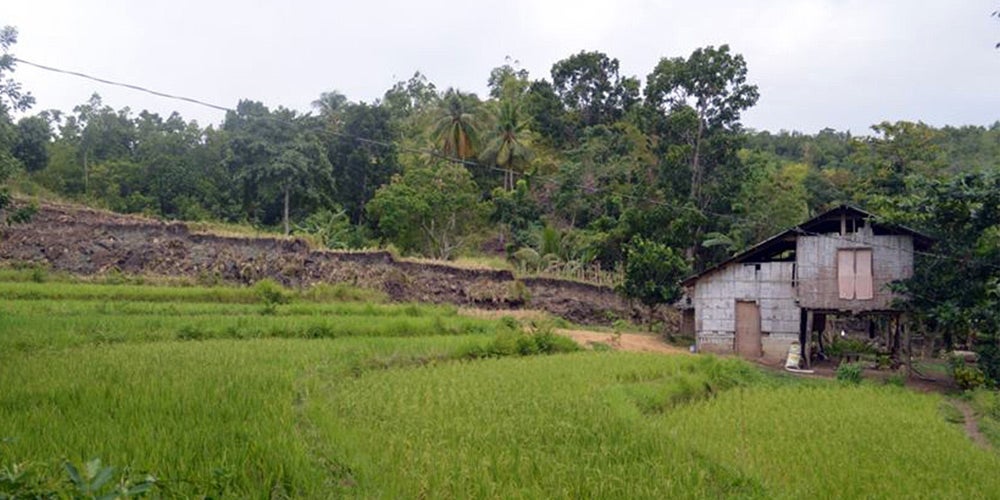 A house stands next to a ground rupture creating a rock wall in the village of Anonang, Inabanga town, Bohol Island brought about by the 7.2-magnitude quake which hit the province October 15. AFP

Dramatic pictures of the Earth-altering power of the 7.1-magnitide quake have emerged as the government worked to mend the broken central island of Bohol, ground zero of the destruction.

A “ground rupture” pushed up a stretch of ground by up to three meters (10 feet), creating a wall of rock above the epicenter, Maria Isabel Abigania, a geologist at the Philippine Institute of Volcanology and Seismology, told Agence France-Presse.

“Our people have walked five kilometers (three miles) so far and not found the end of this wall,” she said, as experts from the institute surveyed the damage.

“So far we have not gotten any reports of people getting swallowed up in these cracks. The fault runs along a less-populated area.”

A photograph on the institute’s website showed part of the rock wall grotesquely rising on farmland behind an unscathed bamboo hut.

Another house was shown lodged in a crack of the Earth, while a big hole on the ground opened up at a banana farm.

Renato Solidum, head of the institute, said the ground fissures from the quake, which killed 198 people on Bohol and two nearby islands, were among the largest recorded since the government agency began keeping quake records in 1987.

“Most of our other quake records show a lateral (sideways) tearing of the earth, though we’ve also had coral reefs rising from the sea,” he said, citing a 6.7-magnitude earthquake that hit the central island of Negros last year.

The Philippines lies on the so-called Pacific Ring of Fire made up of chains of islands, created by volcanic eruption, that are also frequently hit by earthquakes.

President Benigno Aquino told reporters Thursday the institute had assured him the worst was over, though Bohol would continue to be hit by aftershocks over the next few weeks.

“There is no immediate danger” either from the aftershocks or from the ground fissures, said Aquino, who slept in an army tent there overnight Wednesday in solidarity with the survivors.