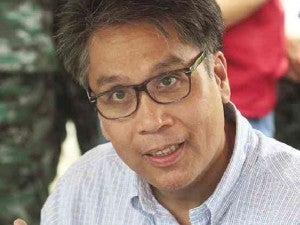 Roxas told President Aquino during the briefing under the tent in front of the municipal hall on Wednesday night that they were still verifying reports that some local officials were hoarding relief goods donated by private organizations and entities.

He, however, didn’t specify or identify the towns or the officials involved in the reported hoarding.

But Roxas said he would ask the Commission on Election if barangay (village) officials were authorized to participate in the distribution of relief goods during an election period.

Governor Edgar Chatto said that under Republic Act 10121 that strengthened the Philippine disaster risk reduction and management system, barangay officials should be directly involved in the distribution goods in times of disaster.

Aquino said relief goods should be sustained by the Department of Social Welfare and Development and be good for two weeks.

“You tell me what is needed and I will find the necessary resources, people, funds,” Aquino told the local and provincial officials on Wednesday night.

Aquino also assured Boholanos that the funding for earthquake relief has been secured.

He mentioned P20 billion in savings for the calamity funds but the Senate should pass a resolution for an additional P7.5-billion funding to augment the current contingency fund.

He asked communities to calm down and not give in to wild rumors spreading via text messages that a stronger earthquake would hit the province.

“Huwag natin hayaan na lumaki yong tension, yong agam agam at uncertainty (Let us not allow the tension and anxiety to rise). And that only happens if we are able to show that the government is really actively working in normalizing the situation,” he added.

Aquino also instructed the Department of Public Works and Highways (DPWH) to employ additional personnel to inspect houses that were damaged and destroyed to check on their structural safety.

The local government units, he added, should have systematic assessment of the houses that were either destroyed or damaged.

If these houses were found to be structurally sound, these residents could go home to reduce the number of evacuees.