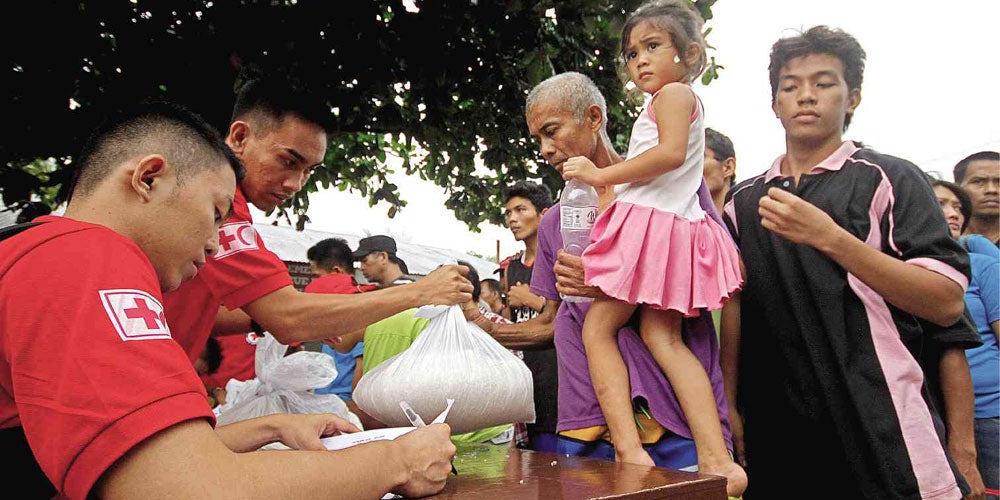 RED CROSS ORDERED TO LEAVE. A father carrying his daughter receives aid from the Philippine Red Cross in Maribojoc, Bohol. The mayor later asked the Red Cross to leave the town, claiming the group had disrupted Maribojoc’s aid distribution system. But the Red Cross said the local authorities had asked it to hand over aid to them but it refused. ALANAH TORRALBA

MARIBOJOC, Bohol—Insisting that the municipality should handle the distribution of relief to earthquake survivors, Mayor Leoncio Evasco Jr. has told volunteers of the Philippine Red Cross to leave after they refused to hand over their items.

Evasco said he was slighted by the “arrogance” of their representative who, he claimed, demanded a list of beneficiaries so they could distribute the relief. “If they want to help, then give,” he said. “Don’t give any conditions.”

Local officials have demanded that relief brought by nongovernment groups for the survivors be handed over to them for distribution in line with the municipality’s centralized distribution system, two sources told the Inquirer in separate interviews.

Others would “help” in the distribution of the goods only to claim credit later, the sources said. They asked not to be identified for fear of reprisals from the officials.

In Manila, Red Cross secretary general Gwen Pang on Tuesday confirmed that Mayor Evasco had stopped the organization’s relief distribution because he wanted the stocks turned over to the local government.

“The local government knew the team was going there. In fact, we were there since Wednesday to assess the situation in the area, to identify who will be given the goods since our priority are those who are really in dire need,” Pang told the Inquirer.

“The people had lined up already when Mayor Evasco asked our people to stop. He told one of our personnel, ‘I’m very disappointed with you. I’m disappointed with the Red Cross. What I wanted was for you to endorse the goods to us and let us distribute the goods,’” Pang quoted the mayor as saying.

“He said that if we insist on doing it our way, we better stop and get out of the place,” she added.

“I’m not the one who is using an organization to promote his own political agenda,” Evasco told the Inquirer.

“Don’t turn us into puppies who follow you around because you have relief items,” he added.

Pang said the Red Cross could not endorse relief to politicians. She explained that the agency was following strict criteria in selecting beneficiaries because it did not have enough for all residents.

Moreover, it is accountable to their donors, she said. “Our system has been globally accepted, that is the same reason we get funds from our donors.”

“But the mayor (Evasco) insisted that the barangay (village) captains can just receive the relief and sign on behalf of the affected families,” Pang said.

“There’s no reason to delay the delivery of relief to the victims of the earthquake. The government is ensuring that there will be enough supplies for the people,” Roxas said in a statement.

“It’s wrong to keep relief provided by the national and provincial governments inside their offices. If the reports are true, those responsible should be held accountable for relief hoarding,” he said.

President Aquino will return to Bohol on Wednesday, ostensibly to bring a sense of order to the distribution of relief on the ground.

As many survivors have complained of receiving too little aid from the government a week after the earthquake, the President ordered national government agencies in charge of relief operations in the Visayas to implement an efficient system of distributing relief stocks, according to Secretary Herminio Coloma.

Aquino will personally check the progress of the relief efforts in at least three towns—Loon, Sagbayan and Tubigon.

He ordered national government agencies led by the Department of Social Welfare and Development (DSWD) to intensify their coordination with local government officials, said Coloma, head of the Presidential Communications Operations Office.

In an interview, Evasco said he imposed the centralized system of distribution to ensure that all 27 villages would receive relief.

He said the local disaster council and the barangay captains had agreed that all relief be coursed through the municipal government while they would identify the victims who would receive the items.

The mayor said he told the barangay officials to set aside politics at this time and focus on bringing help to the villages.

The public market has been converted into a repacking center where each barangay has a representative, Evasco said. The village chiefs would then pick up the relief for their constituents.

To ensure that the intended recipient would receive it, Evasco said the chapel leaders would monitor the distribution.

One of the Inquirer sources expressed fears that the nongoverment organization’s relief packs—intended for a family of six and good for five days—would be given by the barangay officials in smaller quantities to reach more families.

He said it would be useless to provide packs good for a day because the survivors would need another round the next day.

“The danger is that they might use it in the campaign. That was my impression,” the source said, referring to the barangay elections scheduled on Oct. 28.

The barangay chair of Aliswag stopped volunteers from distributing the goods in the evacuation center on Monday, claiming that any donation should be coursed through the municipal government, another source said. The source, however, said she failed to get the name of the official.

At first, the source said, the local leader told the volunteers that he had yet to discuss the matter with his councilors. Later, he told them that he was following orders from Mayor Evasco.

“We stood our ground. We told him that there is no law that stops us from distributing,” she told the Inquirer. “At least, they didn’t tell us to pack up like what happened to the Red Cross.”

“Proper authorities should know about this so something can be done. A lot of people want to help but they cannot trust the LGUs (local government units),” she added.

The residents were hesitant to accept the relief from politicians because they might call their attention if they wouldn’t vote for them in the elections, the source said.

Some have complained that the distribution of relief had been politicized, citing the case of Barangay Candavid, she said.

Randy Camoras, the chair of the Sangguniang Kabataan in the village, said the barangay captain, Julio Barace, had given priority to his allies in the distribution of relief.

Secretary Coloma called on municipal mayors and barangay captains to refrain from playing favorites. “We continue to urge [the local officials] to adopt a very proactive and a very positive outlook and, if possible, to minimize the issues that obstruct instead of help the victims,” he said in a media briefing.

The President “wants to eliminate things that hamper the efficiency of distribution of relief,” Coloma said while acknowledging that the relief agencies were experiencing “challenges” in logistics.

“Those are the guidelines of our officials who are on the ground …  efficiency of distribution and the quality of support we give to our people,” Coloma said.

Because of the meddling politicians, the source said her group had adopted what it called an “ambush relief operation” that allowed the volunteers to go around the province and give the goods directly to the families.

In some areas, she said, barangay councilors would volunteer to help in the distribution but would later claim credit for the relief work.

Interior Secretary Roxas said he received a report from the DSWD that survivors had been complaining about some erring municipal and village officials who were keeping relief items.

Roxas ordered Chief Supt. Danilo Constantino, Central Visayas police chief, to make sure that relief delivered to town officials would be distributed to the intended beneficiaries.

“I also instructed all chiefs of police in Bohol to help in monitoring the delivery of relief. They should make sure the items will reach the earthquake victims even in far-flung areas,” he said.

“There’s no need to hoard for fear that the supplies may run out. The DSWD has enough supplies to feed residents affected by the earthquake every day.”

Roxas said members of the Armed Forces and other volunteer groups were helping DSWD personnel in sending relief to distant villages.

“DSWD personnel in the province are also stepping up their repacking operations in order to increase their delivery to 30,000 a day for at least another week,” he said.

Citing a report from the department, the interior secretary said government and volunteer workers had already distributed a total of 94,300 food packs, or an average of 22,000 packs a day, in Bohol as of Sunday night.—With reports from Michael Lim Ubac and Marlon Ramos in Manila; and Connie E. Fernandez, Inquirer Visayas