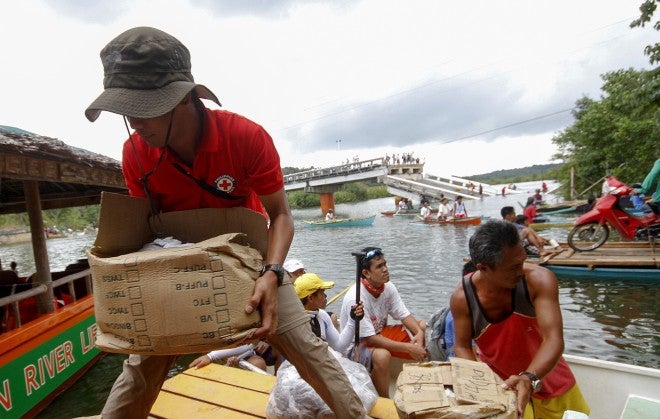 A Red Cross volunteer carries goods that were transported through a boat after a bridge collapsed from a massive quake that hit Bohol, Philippines on 17 October 2013. ALANAH TORRALBA/ IFRC

MARIBOJOC, Bohol, Philippines — Politics have apparently intruded in the distribution of relief goods in Bohol, which is still reeling from the devastation caused by a magnitude 7.2 earthquake.

Some local officials have stopped private groups from distributing relief goods, demanding that these should be coursed through them. Others offered to “help” in the distribution only to claim credit later.

Picture of sample ballots inserted in the relief packs has gone viral in Facebook.

Two sources involved in relief operations in Bohol told the Philippine Daily Inquirer in separate interviews that local officials of Maribojoc insisted that any help for the municipality should be turned over to them.

Both sources asked not to be identified for fear of reprisals from the local officials.

A nongoverment organization (NGO) worker said Maribojoc town Mayor Leoncio Evasco Jr. told them their relief goods should be turned over to the municipality because the distribution should be centralized.

He said that village chiefs would then determine who should receive the relief goods before these were distributed.

But the source said that the village officials would usually prioritize their relatives and allies instead of those who needed the relief goods most.

“The danger is that they might use it in the campaign. That was my impression,” he said.

He added they also feared that their relief packs – good for five days for a family of six – would be chopped up to reach more families. He said it would be useless to provide relief packs good for a day since the victims would need another round the next day.

Another source, a volunteer of a private group involved in relief operations for Bohol, said that a village chief in Marijoboc had stopped them from distributing relief goods in the evacuation center on Monday because any donation should be coursed through the municipal government.

The source, however, said she failed to get the name of the man who claimed to be village chief of Aliswag.

At first, the source said, a man told them to stop the distribution because he had yet to discuss the matter with his councilors.

The official later told the group that he was acting on orders of Mayor Evasco because they had their own system of distribution.

But the source said they had already received complaints from residents that only those allied with the local officials got the relief goods.

“We stood our ground. We told him (village chief) that there is no law that stops us from distributing (relief goods),” she said.

The stand-off lasted for an hour until the village chief relented.

“At least, they didn’t tell us to pack up like what happened to Red Cross,” she told the Philippine Daily Inquirer.

“But proper authorities should know about this so something can be done. A lot of people want to help but they cannot trust the LGUs (local government units),” she added.

Red Cross volunteers were reportedly told to leave the town by Mayor Evasco after they refused to turn over the relief goods to the municipal government.

Mayor Leoncio Evasco Jr. of Maribojoc town said he was slighted by the “arrogance” of the organization’s representative last Wednesday when they came to the town.

He said the Red Cross representative demanded for an immediate list of beneficiaries so they could distribute the relief packs.

Evasco said that he wasn’t able to provide them the list since their information at that time was not available.

“Giingnan man hinoon ko nga ug way lista ihatag, dili mi maka-benefit sa relief goods (I was instead told that if I didn’t have the list, we would not be able to benefit from their relief goods),” he said.

“Ug motabang, ihatag (If they want to help, then give). Don’t set any conditions,” he added.

“I’m not the one who is using an organization to promote his own political agenda,” Evasco told the Philippine Daily Inquirer.

Evasco said he welcomed other groups and organizations that extended assistance to their town like the P1 million cash assistance from Davao City Mayor Rodrigo Duterte. Evasco is the former chief of staff of Duterte.

He also admitted that the system of distribution in the municipality – among the hardest-hit towns in Bohol – has been centralized to ensure that all 27 villages would receive relief goods.

Evasco said he told barangay (village) officials in his town to set aside politics at this time and focus on bringing help to the villages.

He said the public market has been converted into a repacking center where each barangay would have a representative. The village chiefs would then pick up their relief goods for distribution to their constituents.

To ensure that the intended recipient would receive it, Evasco said the chapel leaders would monitor the distribution.

But some residents of Maribojoc complained that the distribution of relief goods had been politicized like in the case of Barangay Candavid.

Randy Camoras, Sangguniang Kabataan chairman of Candavid, said village chief Julio Barace prioritized his allies in the distribution of relief goods before the other residents were given their share.

A volunteer of the private group told the Philippine Daily Inquirer that that they noticed that every time they distributed their relief goods, some earthquake victims would ask where the goods came from.

When they told them that these were from private groups, she said the victims were thankful because the distribution was not selective.

She added the victims appeared hesitant to accept relief goods from politicians who might get angry should they decide not to vote for them in the barangay elections.

Due to politicians’ intervention, the source said they had adopted what they called as “ambush relief operation,” which would require them not to stay in one place for too long.

They would go around the province, distribute relief goods directly to families and then leave, without allowing village officials to participate in the distribution.

She said there had been cases where village councilors would volunteer to help in the distribution but would later claim credit.

The source said they didn’t leave their relief goods in the municipal government or with village officials because there had been instances when sample ballots were inserted in the relief goods.

A picture of a sample ballot in the relief goods had gone viral in Facebook.

The photo was posted by one Verti Bullercer who wrote that the relief goods distributed to earthquake victims in Calvario, Loay town had been inserted with a sample ballot.

“It is so difficult and sometimes, discouraging. It’s just hard and sad some officials using this suffering of the people to market themselves, to sell themselves to the people,” she said.

She said they met with other private organizations in Bohol and vowed that they would not allow “these challenges” to stop them from helping the earthquake victims.

Police asked to prevent hoarding of relief goods in Bohol

Barangay polls in Bohol, Zamboanga City to be held Nov. 25