Police asked to prevent hoarding of relief goods in Bohol 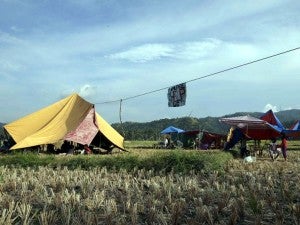 MANILA, Philippines—Interior Secretary Mar Roxas said Tuesday he has asked the Philippine National Police to investigate reports that local government officials in Bohol were holding up the distribution of relief goods.

“There’s no reason to delay the delivery of relief goods to the victims of the earthquake. The government is ensuring that there will be enough supplies for the people,” Roxas said in a statement. “It’s wrong to keep relief goods provided by the national and provincial governments inside their offices. If the reports are true, those responsible should be held accountable for relief hoarding.”

According to Roxas, he received a report from the Department of Social Welfare and Development that residents displaced by the Oct. 15 quake had been complaining about unidentified municipal and barangay officials who were allegedly keeping relief items.

Roxas said he had ordered Chief Supt. Danilo Constantino, head of the PNP command in Central Visayas, to make sure that relief goods delivered to municipal officials are distributed to the intended beneficiaries immediately.

“I also instructed all chiefs of police in Bohol to help in monitoring the delivery of relief goods. They should make sure that the relief goods will reach the earthquake victims even in far-flung areas,” he said. “There’s no need to hoard relief goods for fear that the supplies may run out. The DSWD has enough supplies to feed residents affected by the earthquake every day.”

He said personnel of the Department of Public Works and Highways and the Bohol Provincial Engineering Office have been repairing damaged roads and bridges to “ensure that all roads remain inter-connected and that no municipality is isolated from the major highways.”

Every town in Bohol, including the municipalities of Loon, Maribojoc and Antiquera, may now be reached by land from Tagbilaran City, Roxas said.

Last Saturday, he said, he himself drove the lead vehicle of the government convoy to check on the status of the roads, bridges and evacuation centers in the towns of Sagbayan, Clarin, Tubigon, Antiquera, Maribojoc, Catigbian, Balilihan and Corella.

Within six hours, Roxas said, the convoy was able to traverse 250 kilometers of alternate roads and highways which were reopened to traffic.

“We are making sure that all roads leading to the hardest hit villages are open. There’s no reason why food packs, water and other relief items will not reach the earthquake victims,” Roxas said.

He said members of the Armed Forces and other volunteer groups were helping DSWD personnel in sending relief goods to distant villages.

“DSWD personnel in the province are also stepping up their repacking operations in order to increase their delivery to 30,000 a day for at least another week,” Roxas said.

Citing a report from the DSWD, Roxas said government and volunteer workers had already distributed a total of 94,300 food packs, an average of 22,000 packs a day, to affected areas in Bohol as of Sunday night.

PNP ordered to probe hoarding of relief goods in Bohol