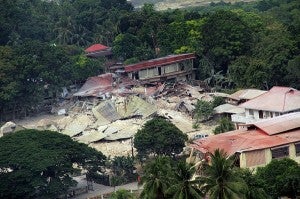 MANILA, Philippines — Bohol and Cebu provinces were rattled Sunday morning by magnitude 5 earthquakes, two of over 2,000 aftershocks recorded on Sunday by the Philippine Institute of Volcanology and Seismology (Phivolcs) from the powerful tremor that jolted the provinces last week.

Phivolcs, as of noon Sunday, have detected 2,078 aftershocks, 39 of which were felt, from the October 15 magnitude 7.2 Bohol earthquake.

Of the aftershocks, the strongest happened at around 4:40 a.m. Sunday registering at a magnitude 5.1, with its epicenter 60 kilometers northeast of Tagbilaran City and a depth of 5 kilometers. The earthquake was felt at Intensity IV in Lapu-Lapu City and Intensity II was felt in Iloilo City.

Phivolcs describes a magnitude 5 earthquake as one of moderate strength. Magnitude 5 tremors are felt over wide areas while some can cause small local damage near the epicenter.

Based on the Phivolcs Earthquake Intensity Scale (PEIS), an intensity V earthquake is strong and generally felt by most people indoors and outdoors. Strong shaking and rocking is felt throughout a building where hanging objects swing violently and dining utensils clatter. Small, light and unstable objects may topple over while liquids spill from open containers. Vehicles can be observed to rock.

An intensity IV earthquake is moderately strong and may be felt by some people indoors and outdoors. The vibration felt is similar to that of a passing heavy truck and hanging objects swing considerably. Dinner, plates, glasses, windows and doors rattle while floors and walls of wood-framed buildings creak. Standing motor cars may rock slightly while liquids in containers are slightly disturbed. A rumbling sound may sometimes be heard.

An intensity III tremor is described as weak and is felt by people indoors, particularly those on the upper floors of buildings, and dizziness and nausea may be experienced by some. The vibration felt is similar to that of a passing light truck and suspended objects may swing moderately.

Magnitude is the measurement of the energy released at the source of the earthquake while intensity describes the strength of shaking based on its visible effects on objects and the environment.