Before his death, Kiram III tells family to continue fight to re-possess Sabah 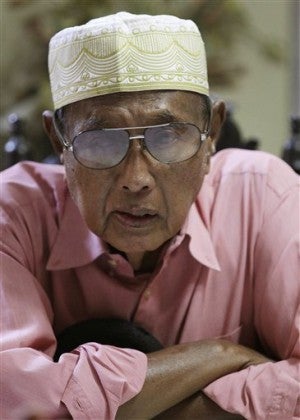 MANILA, Philippines — Sultan Jamalul Kiram III, who died of multiple organ failure on Sunday morning in a government hospital in Quezon City, will be buried in the ancient capital of the Sultanate of Sulu in Maimbung town, according to the sultanate’s spokesperson.

“It was his wish to be buried in the ancient capital of the sultanate in Maimbung, Sulu,” said Abraham Idjirani, also the sultanate’s secretary general.

He said Kiram’s family was already arranging for the flight that would take his remains to Jolo so they could bury him within the day in accordance with the Muslim tradition.

From the airport in Jolo, Idjirani said Kiram would be taken to Maimbung, located some six kilometers away from the capital of Sulu.

Before he died at the Philippine Heart Center, Idjirani said, the sultan issued three “decrees” for his heirs.

First, he said, Kiram ordered his siblings “to love one another and all the members of the Kiram clan.”

Second, he said, the sultan also wanted his family “to be always united.”

“Lastly, he said the fight to repossess Sabah from Malaysia must continue for the Filipino people,” Idjirani told the Philippine Daily Inquirer over the phone.

He said Kiram’s body was taken to the Blue Mosque in Taguig City while awaiting for the flight to Jolo.