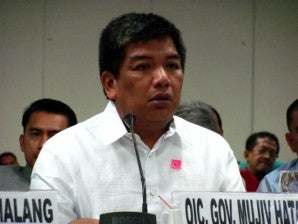 MANILA, Philippines — Governor Mujiv Hataman of the Autonomous Region in Muslim Mindanao and Sulu Vice Gov. Abdusakur Tan expressed their condolences to the family of Sultan Jamalul Kiram III of the Sulu sultanate following his death on Sunday.

“Our sincerest condolence to his family and we pray that Allah’s mercy be upon him,” said Hataman in a statement.

Tan said he went to the Kiram’s residence in Taguig on Sunday “to pay my last respect as a Tausug leader and a relative.”