LUCENA CITY, Philippines – The number of fatalities in the eight-vehicle smash up in Atimonan, Quezon pre-dawn on Saturday now stood at 19, police said.

Ylagan, interviewed by phone from the accident site, said the Bicol-bound Super Lines bus with body number 441 was traversing the diversion road when its driver lost control of the vehicle. 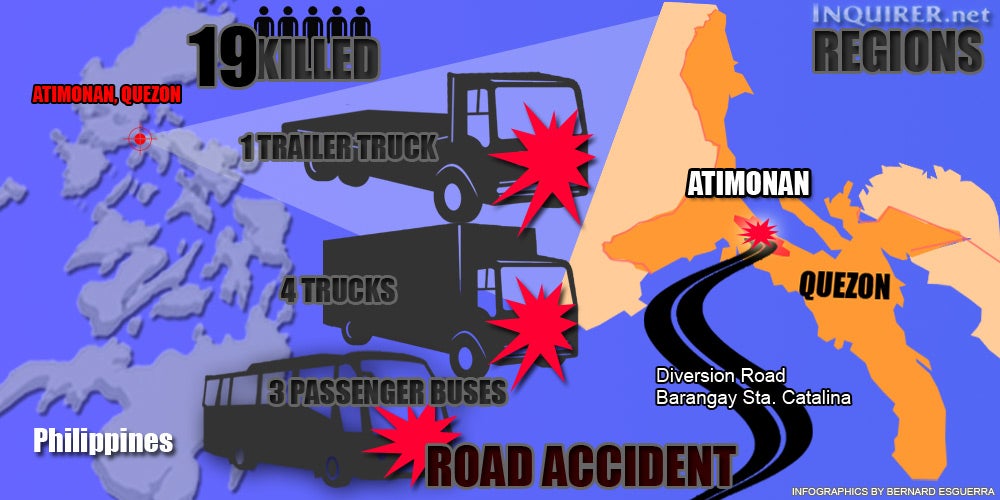 All the fatalities died on the spot from injuries in different parts of their bodies. Most of them were crushed inside the wreckage of the vehicles.

Ylagan and the Quezon police information office so far identified only 13 of the 19 fatalities as:

Confined at the Emil Joahna Hospital, also in Atimonan, were:

A Passenger of Isarog bus now treated at Emil Joahna Hospital, was:

The 12 other unidentified wounded were brought to a hospital in nearby Gumaca town and Lucena City, said the Quezon police bulletin.

Chief Inspector Jomar Yupio, Atimonan police chief, said most of the fatalities were aboard the Super Lines bus, which was carrying a total of 49 passengers.

He said one jeepney was also involved but only suffered minor damage.

“Based from the testimonies of the truck drivers, they were (hit) by the incoming Super Lines bus. But the Super Lines bus driver was also saying that before he lost control of his bus, another vehicle bumped him from behind,” Yupio said.

The driver of the Super Line bus, Albert Nava, is now detained at the town jail.

“My staffs were having a hard time retrieving some of the wounded. Some of them were also pinned down inside the wreckage,” he said.

Yupio described the accident site as a dark place with no electric lamp post. “The road was also slippery because of the heavy rains,” he said.

“I noticed that the diversion road seriously lack road signs that could guide motorists especially during rainy nights. These trucks and buses have strong lights not to see the signs,” Mendoza said over the phone.

The DPWH had long been complaining that steel road signs were often pilfered by thieves which they would sell at the junk shops.

The accident caused a traffic jam along the highway. The road was temporarily blocked from motorists. Light vehicles were directed to take the old zigzag road.