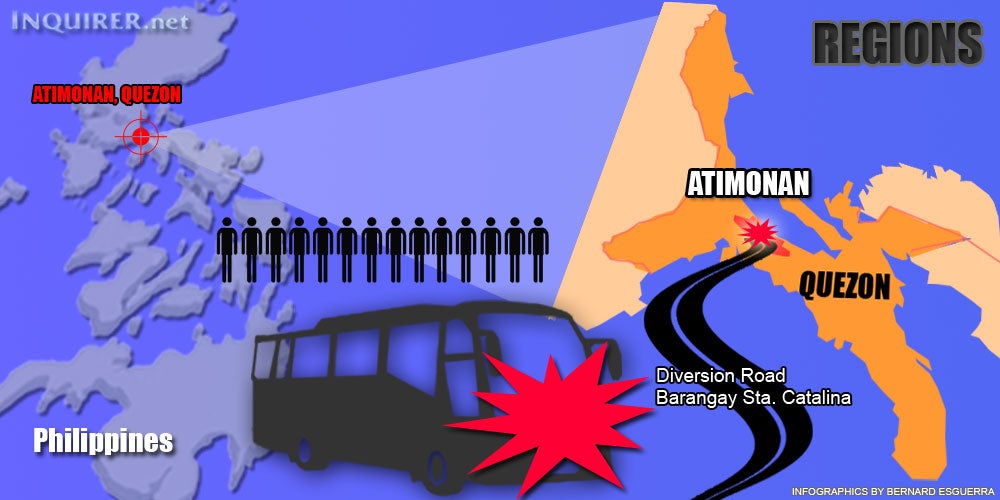 “My men are still in extracting two bus passengers who were both pinned down inside the bus wreckage. Hopefully, they will be extracted alive,” Henry Buzar, coordinator of Quezon Provincial Disaster Risk Reduction and Management Council.

Buzar said he immediately dispatched a team of rescuers at the accident site.

“My staffs were having a hard time retrieving some of the wounded. Some of them were also pinned down inside the wreckage,” he said.

Chief Inspector Jomar Yupio, Atimonan police chief, said most of the casualties were aboard Superlines bus, one of the vehicles that were involved in the accident.

Some of the fatalities were aboard the ten-wheeler truck, police said.

He said the ill-fated passenger bus was carrying 49 passengers.

The police official said they have yet to complete their investigation on the accident that happened on the Diversion Road in Barangay Sta. Catalina at around 1 a.m.

He said they were still investigating the drivers of the involved vehicles – three passenger buses, four trucks and one trailer truck.

He said one jeepney was also involved but only suffered minor damage.

“Based from the testimonies of the truck drivers, they were bumped by the incoming Superlines bus. But the Superlines bus driver was also saying that before he lost control of his bus, another vehicle bumped him from behind,” Yupio said.

The investigators were still in the process of collating all the names of the victims, Ylagan said.

Yupio described the accident site as a dark place with no electric lamp post. “The road was also slippery because of the rains,” he said.

The accident site was temporarily blocked from traffic.

The Quezon police said at total of 44 victims were injured in the road accident.

Passengers of Superlines bus and confined at Doña Marta Memorial Hospital in Gumaca:

Passengers of Superlines bus and confined at Emil Joahna Hospital also in Atimonan:

Police said the 10 other unidentified wounded victims were brought to a hospital in nearby Gumaca town.
Originally posted: 3:19 am | Saturday, October 19th, 2013

Read Next
UP team about to complete mapping of flood-prone areas
EDITORS' PICK
PH preps for China virus: Question of when, not if
Beyond water service: Maynilad builds massive infrastructure projects to clean up Metro Manila waterways
Museums ‘put to sleep,’ churches closed amid volcano’s unrest
Seventh judge assigned to handle De Lima case
SM continues to send relief assistance to remote towns in Batangas
Get exciting deals and discounts when you download the new McDonald’s App
MOST READ
Taal Volcano flexes signs of restiveness anew
Part of Aurora Boulevard in Cubao closed from Jan. 25 – Feb. 1
Passengers from Wuhan, China to be flown out of Kalibo, Aklan – CAAP
Lacson on Duterte’s threat to end VFA over Bato’s canceled visa: Where is the connection?
Don't miss out on the latest news and information.