Toll in Bohol quake up to 175, damage to infrastructure over P500M--NDRRMC | Inquirer News
Close
menu
search

Toll in Bohol quake up to 175, damage to infrastructure over P500M–NDRRMC 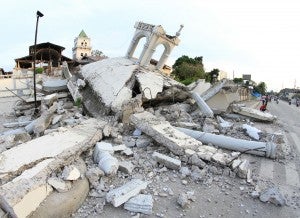 This Tuesday, Oct. 15, 2013 photo shows a collapsed building in Bohol after a 7.2-magnitude earthquake struck the central Philippine island of Bohol in the morning. AP

The NDRRMC announced in its latest bulletin that as of 6 a.m.,162 bodies have been recovered in Bohol, 12 for Cebu and one in Siquijor.

Casualties of the destructive earthquake, which hit Bohol the hardest, stood at 487—with 393 from Bohol, 89 in Cebu, 3 in Siquijor, and one each from Iloilo and Negros Oriental.

A total of 17 people are missing from Bohol alone, the NDRRMC said.

It added that the tremor, which recorded 1,846 aftershocks since Friday, has affected and displaced 695, 466 families, which is equivalent to more than three million persons.

The damage wrought by the earthquake to roads, bridges and flood control in the affected areas reached over P500 million, with P525 million recorded in Bohol, P23.15 million in Cebu, P1.45 million in Siquijor and P250,000 in Negros Oriental.

Meanwhile, the report said the operations of all airports and seaports in Cebu and Bohol are back to normal.