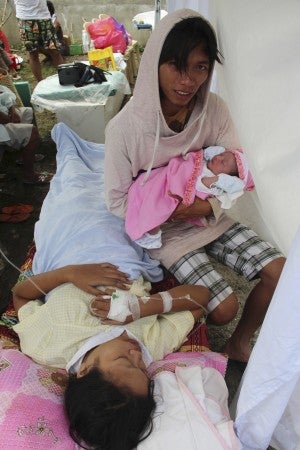 Earthquake survivor Ryan Ybanez holds his new born baby boy beside his wife, Anjanette, as they stay at the makeshift maternity ward outside the Calape Mother and Child Hospital in Calape, Bohol province, central Philippines on Thursday Oct. 17, 2013. Anjanette was one of five young mothers who delivered in Calape since the 7.2 magnitude quake hit Bohol Island, killing more than a hundred people, destroying hundreds of homes and a dozen or more centuries-old chuches. Eleven hospitals were damaged. AP

LOON, Philippines — Surgeons were planning to save lives on open-air operating tables in a hospital carpark Thursday as rescuers struggled to help isolated survivors of a powerful earthquake in the Philippines which has claimed at least 161 lives.

“I hope the people will understand. While we want to bring aid to them, our main adversary is accessibility,” Morante told AFP.

“We acknowledge that there are still gaps in the emergency response. We cannot address the many needs all at the same time.”

In the port of Tagbilaran, the provincial capital, boats were offloading injured victims from other parts of the island, while emergency rations were being loaded onto separate vessels to take to more remote areas, an AFP photographer saw.

Patients waited to be operated on in the parking lot of a provincial hospital, their beds sheltered under makeshift tents because the main building was already filled with injured survivors.

“Rescuers took two hours to get me. I lay pinned down next to two young customers who were crushed to death,” said John Espanola, 19, a college student pulled out from a collapsed Internet shop in Sagbayan town with a suspected broken arm.

“I prayed hard. I knew there was a possibility that I would not get out of it alive,” said Espanola, the only survivor in a building collapse that killed five people.

Morante said helicopters were being used to evacuate some of the injured as well as resupply the isolated towns with emergency food rations.

Tens of thousands of survivors had taken refuge at government-run shelters in public buildings left standing on Bohol, while others were sleeping in tents beside their homes, terrorized by aftershocks, she added.

The search for 21 missing people had focused on the coastal town of Loon and neighboring Antequera, which were close to the earthquake’s epicenter, Bohol police chief Senior Superintendent Dennis Agustin told AFP.

Search and rescue teams had reached those areas by boat and narrow dirt roads over the past 24 hours, he added.

In the upland farming village of Cantam-is, about 10 kilometers from Loon, Salvador Bonito waited on Thursday for help beside a large pile of mud, rocks and debris that was once home to three of his friends.

“Rescuers from our church tried to reach the buried house, but we had to give up because the ground kept shifting due to aftershocks,” Bonito told AFP, adding they had yet to receive outside help.

National Disaster Risk Reduction and Management Council spokesman Rey Balido said the number of people confirmed killed in the earthquake had risen to 161, up by 10 from Wednesday.

Nearly all the fatalities were recorded on Bohol, one of the country’s top tourist destinations that boasts of rolling “Chocolate Hills” and tiny primates called tarsiers.

Eleven people died in Cebu, the country’s second-largest city located on a nearby island of the same name, while one person was killed on the island of Siquijor, Balido said.

The Philippines lies on the so-called Ring of Fire, a vast Pacific Ocean region where many earthquakes and volcanic eruptions occur.