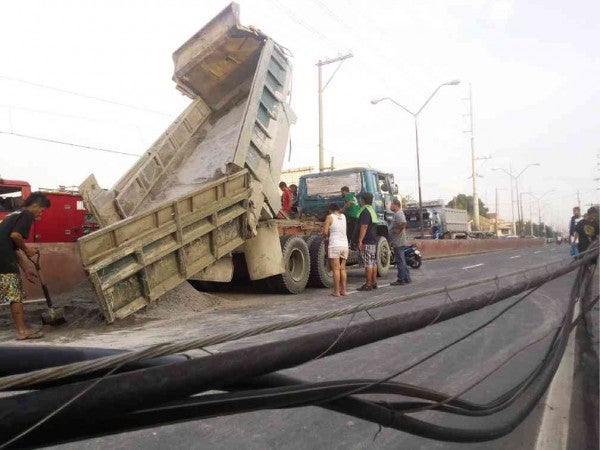 Traffic ground to a halt along a major road in Cainta, Rizal province on Tuesday afternoon after a dump truck loaded with sand hit overhead utility cables and toppled several lamp posts.

A 19-year-old factory worker was hurt and two other vehicles were damaged in the incident.

The south and northbound lanes of Felix Avenue (formerly Imelda Avenue) were impassable for two hours, trapping vehicles using routes that stretched to Marcos Highway and Ortigas Avenue on opposite ends of the 4-kilometer thoroughfare.

Al Villar, 33, a truck driver for a construction supply firm, told the Inquirer that he was driving towards Ortigas Avenue about 4 p.m., when the metal carrier of his vehicle hit cables hanging across the road.

The impact toppled at least two lamp posts outside the gates of Kasibulan Subdivision, causing telephone and electric wires to crash into two passing vehicles and injure Daren Fernando, 19, who suffered bruises on his right leg.

Villar could not explain how the carrier was dislodged since two separate switches must be used  to set in motion.

He said he was with a helper when the incident happened, but  insisted that they had not touched any of the switches.

“It was an accident,” he said.

The policeman said the driver faces charges of reckless imprudence resulting in damage to property.

Meanwhile, the owner of the truck, Aricelo Sumagang, 48, said he accepted responsibility for the incident and would settle with the concerned parties for damages incurred as a result of the crash.

“For sure, we will pay for the damages. We will be talking to Meralco and the municipal government to settle the issue,” Sumagang said.

The businessman also apologized to everyone affected by the incident.