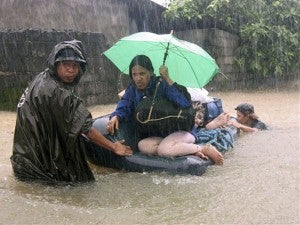 At least 132 people were infected with leptospirosis in and around the northern city of Olongapo, following deadly flash floods in the area last month, health department epidemiologist for the area Jessie Fantone told AFP.

“This is a bacterial infection caused by exposure to rat urine in flooded urban areas,” Fantone told AFP in a telephone interview.

“The hospitals in the area have been overwhelmed. We have dispatched more personnel, hospital beds and medicine.”

While the floods that struck the area late last month have subsided, the disease can incubate in the human body for up to 30 days before flu-like symptoms appear, Fantone said.

He said the infection, which in its most serious form is also known as Weil’s disease, can eventually lead to kidney failure, requiring dialysis.

The health official said it was likely many of the patients had ignored early symptoms, or self-medicated believing they had influenza, instead of seeking professional treatment.

One of the dead had ingested the bacteria while swimming through floodwaters, unlike the rest who caught it through skin exposure, he added.

Fantone said the 90 infected people who remain in hospital were all likely to survive, but local health authorities expect the number of cases to rise as more people seek treatment.

At least 30 other people died during the flooding, which unleashed landslides in several villages around Olongapo, according to an official tally.

The health department said a leptospirosis epidemic in 2009 infected more than 1,000 people, killing 89 in and around Manila, after Tropical Storm Ketsana wrought deadly floods on large areas of the Philippine capital.

Over 100 leptospirosis cases reported in Olongapo after floods