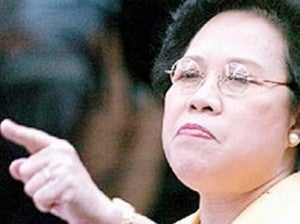 “That is an idealistic and constitutional proposal,” Santiago said in radio interview, reacting to Puno’s proposal.

“However, I am afraid it will not be feasible, because the number of signatures required on a petition is too high and can be subverted by vote-buying, to convince voters to stay away,” she said.

Under the law on people’s initiative, Santiago said the people can directly propose and then enact a law, but only after the registration of a petition which must contain at least 10% of the total number of registered voters.

She said the law also provides that every legislative district must be represented by at least 3% of the registered voters.

She said it would also be too expensive to conduct information and education campaign for voters so that they can understand the meaning and context of an anti-pork barrel law under the system of initiative and referendum.

A “better alternative” to the proposed petition for initiative and referendum and the various petitions filed at the Supreme Court, Santiago said, is a Budget Control and Impoundment Act, originally proposed by President Benigno Aquino III when he was senator. Santiago re-filed the measure this present Congress.

“It provides that like its American version, after Congress authorizes appropriations, and the executive department does not intend to spend the budget items for which he is authorized, then the President has to go back to Congress with a request to impound the appropriations,” she said.

“The power to grant or not the request to impound will continue to belong to Congress.  Thus, such a law will preserve the congressional power of the purse,” she further said.

Santiago said Aquino was right in filing the measure, saying the President should not make a habit of requesting large budgets for some departments “and then, in the middle of the year, juggles the funds, repackage it as DAP, and spend it the way he wants.”

She was referring to the recent controversy surrounding the release of additional funds allegedly given to senators and congressmen through the so-called Disbursement Acceleration Program or DAP after impeaching former Chief Justice Renato Corona.

Asked what advice she would give to Aquino on the pork barrel issue, Santiago said:  “Life is a consequence of our moral choices.”