Over 100 leptospirosis cases reported in Olongapo after floods 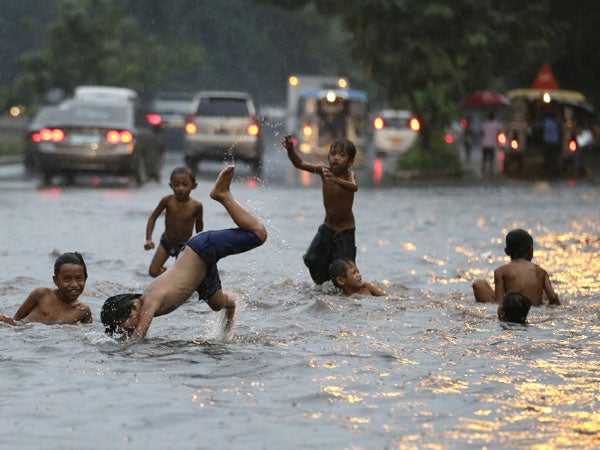 Children play in floodwaters following monsoon rains that flooded low-lying areas in Manila on Sept. 28, 2013. Two weeks after heavy flooding brought about by rain engulfed Olongapo City, more than 100 cases of leptospirosis have been recorded, according to Philippine Red Cross and local government officials. AP

OLONGAPO CITY, Philippines—More than 100 cases of leptospirosis have been recorded here two weeks after heavy flooding brought about by rain enhanced by the southwest monsoon engulfed the city, according to Philippine Red Cross (PRC) and local government officials.

PRC chair Richard Gordon said most leptospirosis patients have sought treatment at the James L. Gordon Memorial Hospital (JLGMH). The PRC, he said, was checking reports that at least three people had died from the disease.

Gordon said PRC assessment teams have been sent to Olongapo City and other towns in Zambales and Bataan provinces that had been flooded last month to check the residents’ health and other needs.

He said 20 PRC nurses have been caring for the sick at the JLGMH.

The Department of Health says that leptospirosis is an infection commonly transmitted to humans from water contaminated by animal urine, usually rats, and comes in contact with cuts or wounds, eyes or with the mucous membranes.

Symptoms of leptospirosis include fever, chills and severe headache.

The DOH said these symptoms appear four to 14 days after exposure to contaminated floodwater or mud.

The Inquirer on Tuesday sought but failed to get Mayor Rolen Paulino’s statement on the spread of the disease and updates on the clean-up in the city.

However, in his account in the social networking site Facebook, Paulino confirmed 103 leptospirosis cases in the city.

Paulino asked residents not to ignore recurring fever and urged them to consult a doctor.

Most of those suffering from leptospirosis in Olongapo are residents of Sta. Rita, the most heavily flooded area in the city on Sept. 23.

Gordon, a former mayor of Olongapo, said the PRC sent over 100 beds to the JLGMH because the hospital did not have enough to accommodate patients.

“We had to put up the beds at the emergency wards, corridors and lobby of the hospital because the rooms were already full of patients,” he said.

The DOH, he said, had promised to send teams here to assist leptospirosis patients.