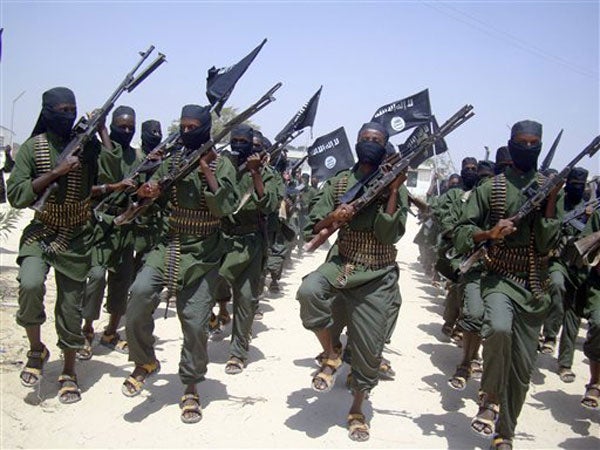 MOGADISHU, Somalia — U.S. Navy SEALs carried out a pre-dawn raid Saturday on a coastal town in southern Somalia looking for a specific al-Qaida suspect linked to the Nairobi shopping mall attack, but did not get their target, a U.S. military official told The Associated Press.

A former U.S. military official also confirmed the raid by the SEALs, but no other details have been provided. Both spoke on condition of anonymity because they were not authorized to discuss the raid by name. The Pentagon declined comment.

In Somalia, officials said international military forces carried out a pre-dawn strike Saturday against foreign fighters in the town of Barawe. Officials said the strike was aimed at “high-profile” targets.

The strike was carried out in the hours before morning prayers in Barawe, the same town where Navy SEALs four years ago killed a most-wanted al-Qaida operative, the officials said.

The leader of al-Shabab, Mukhtar Abu Zubeyr, also known as Ahmed Godane, claimed responsibility for the Nairobi attack and said it was in retaliation for Kenya’s military deployment inside Somalia to prevent a takeover by the militant Islamic Somali group.

In Kenya, a military spokesman released the names of four men implicated in the mall attack.

A resident of Barawe — a seaside town 240 kilometers (150 miles) south of Mogadishu — said by telephone that heavy gunfire woke up residents before dawn prayers. An al-Shabab fighter who gave his name as Abu Mohamed said “foreign” soldiers attacked a house, prompting militants to rush to the scene to capture a soldier. Mohamed said that effort was not successful.

The foreign troops attacked a two-story beachside house in Barawe where foreign fighters lived, battling their way inside, said Mohamed, who said he had visited the scene. Al-Shabab has a formal alliance with al-Qaida, and hundreds of foreign fighters from the U.S., Britain and Middle Eastern countries fight alongside Somali members of al-Shabab.

Foreign militaries — often the U.S. but not always — have carried out several strikes inside Somalia in recent years against al-Shabab or al-Qaida leaders, as well as criminal kidnappers.

“I confirm those are the names of the terrorist,” he said in a Twitter message sent to The Associated Press.

Matt Bryden, the former head of the U.N. Monitoring Group on Somalia and Eritrea, said via email that al-Kene and Umayr are known members of al-Hijra, the Kenyan arm of al-Shabab. He added that Nabhan may be a relative of Saleh Ali Saleh Nabhan, the target of the 2009 Navy SEALs raid in Barawe.

In September 2009 a daylight commando raid carried out by Navy SEALs in Barawe killed six people, including Nabhan, one of the most-wanted al-Qaida operatives in the region and an alleged plotter in the 1998 bombings at U.S. embassies in Kenya and Tanzania that killed more than 250 people.

Military raids carried out by troops on the ground carry the risk of a troops being killed or captured, but they also allow the forces to collect bodies or other material as evidence. Missile strikes from sea of unmanned drones carry less risk to troops but increase the chances of accidental civilian deaths.

A resident of Barawe who gave his name as Mohamed Bile said militants in Barawe closed down the town in the hours after the assault, and that all traffic and movements have been restricted. Militants were carrying out house-to-house searches, likely to find evidence that a spy had given intelligence to a foreign power used to launch the attack, he said.

“We woke up to find al-Shabab fighters had sealed off the area and their hospital is also inaccessible,” Bile told The Associated Press by phone. “The town is in a tense mood.”

The identities of the four men from the mall attack came as a Nairobi station obtained and broadcast the closed circuit television footage from Westgate. The footage shows four attackers calmly walking through a storeroom inside the complex, holding machine guns. One of the men’s pant legs appears to be stained with blood, though he is not limping, and it is unclear if the blood is his, or that of his victims’.

Government statements shortly after the four-day siege began on Sept. 21 indicated between 10 to 15 attackers were involved, but indications since then are that fewer attackers took part, though the footage may not show all of the assailants.

It’s not yet known if the attackers managed to escape after the attack.

Terrified shoppers hid behind mannequins, inside cardboard boxes, in storage rooms, in ventilation shafts and in the parking lot underneath parked cars.