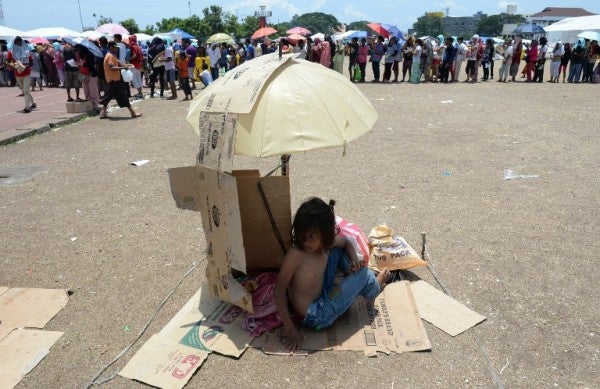 A young evacuee, one of the thousands affected by the stand-off between Philippine government forces and Muslim rebels, shelters from the scorching heat as others queue up for food distribution at an evacuation centre inside a sports complex in Zamboanga, on the southern Philippine island of Mindanao. AFP FILE PHOTO

MANILA, Philippines – The fighting may be over but a humanitarian crisis remains in Zamboanga City as more than a hundred thousand displaced residents would need long-term support in rebuilding their homes and lives, according to a United Nations relief agency.

In its latest report on the situation in Zamboanga released Friday, the UN Office for the Coordination of Humanitarian Affairs cited the lingering humanitarian disaster in the wake of three weeks of fighting between government troops and guerrillas of a faction of the Moro National Liberation Front led by Nur Misuari.

“The Government recently announced that its stand-off with the MNLF faction has ended. However, the humanitarian crisis continues,” the UN agency said in its report.

“The task of reconstructing homes and rebuilding the communities affected physically and psychologically by the conflict is a massive one. The government now hopes that people who lost their homes in the fighting will be housed in bunk houses until they can rebuild,” it added.

More than 200 people were killed and at least 10,000 homes were destroyed by fires and heavy bombardment during the 20-day standoff between the government and Misuari’s followers.

A warrant has been issued for Misuari’s arrest on charges of rebellion and crimes against humanity for allegedly fomenting the conflict. The former governor of the Autonomous Region in Muslim Mindanao declared independence for a “Bangsamoro Republik” amid continuing peace talks between the government and the Moro Islamic Liberation Front, as faction that broke away from the MNLF years ago.

The Zamboanga conflict stalled a tripartite review by representatives of the government, the MNLF and the Organization of Islamic Cooperation of a 1996 Final Peace Agreement between the government and the MNLF. Misuari charged that the agreement has not been fully implemented.

The UN relief agency pointed out health and safety concerns as more than 117,000 displaced residents remained in 35 evacuation centers, most of which lacked adequate toilet and sanitation facilities, thus exposing evacuees to health risks.

These evacuees currently rely on food assistance, but between 8,000 and 10,000 may “need sustained food assistance in the next three to 12 months,” said the UN agency.

The agency noted also that more than 8,000 person in the neighboring island province of Basilan had also been displaced by attacks carried out there by the MNLF and the terrorist group Abu Sayyaf at the height of the Zamboanga fighting.

The UN High Commission on Refugees and the UN Children’s Fund have also taken initiatives to protect women and children in the evacuation centers, where incidents of abuse have been reported.

“UNHCR and UNICEF are addressing safety concerns with women-friendly spaces established in the bigger camps, and with psychological interventions for more than 2,500 children and 1,500 adults,” said the UN relief agency’s report.

Palace confirms Zamboanga crisis is over

No one is starving in Zamboanga evacuation camps—Lacierda