Palace confirms Zamboanga crisis is over 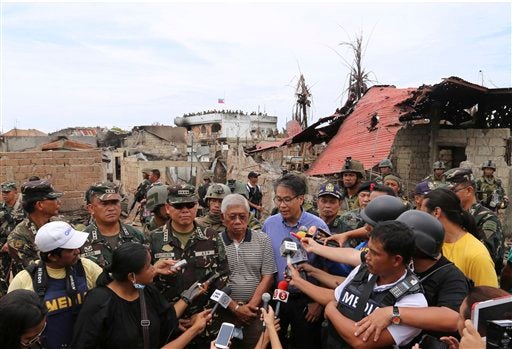 MANILA, Philippines—Malacañang on Saturday confirmed that the deadly three-week standoff between government troops and Muslim rebels who held nearly 200 people hostage in Zamboanga City has ended with all of the captives safe.

“We are confirming the statement that the Zamboanga City crisis is over,” Deputy presidential spokesperson Abigail Valte said on television.

Gazmin said only a handful of MNLF rebels remained in hiding and were being hunted by troops in the coastal outskirts of Zamboanga City, adding authorities were trying to determine if rebel commander Habier Malik, who led the siege that began on September 9, was dead.

More than 200 people were killed in the clashes, including 183 rebels and 23 soldiers and police, in one of the bloodiest and longest-running attacks by a Muslim group in Mindanao, scene of decades-long Muslim rebellion for self-rule in the largely Roman Catholic country.

Valte said that with the rescue of all remaining hostages, the mission was deemed accomplished.

“It has been the task of the officials on the ground to ensure the safety of the hostages and that has been accomplished,” she said.

In a press briefing on Saturday, Interior Secretary Mar Roxas said the first phase of the conflict was finished, and government forces were now conducting clearing operations. The last phase would be rehabilitation, he said.

In the same briefing, the whereabouts of MNLF leader Habier Malik were not detailed, but military chief General Emmanuel Bautista said that the only remaining “enemies” were “stragglers,” and they were only a few.

The MNLF rebels stormed Zamboanga City on September 9, in a bid to hoist their flag in the city hall to signify the formation of an independent “Bangsamoro Republik,” where Misuari earlier declared himself as chief of the Bangsamoro Armed Forces. The group is opposing government’s peace initiatives with its rival, the Moro Islamic Liberation Front.

The siege caused airports, seaports and businesses to shut down for a week. Classes only resumed this week in areas not directly affected. About P5 billion were reportedly lost in trade and commerce in the last three weeks.

Nearly 200 were killed, with 166 of them rebels and 23 from combined security forces.

Hardest hit were the civilians, with at least 100,000 of them housed in more than 50 shelters. A portion of these will not have homes to go back home to as thousands of homes were burned and destroyed to gunfires and fire incidents. The population of Zamboanga City is close to a million. With a report from Associated Press