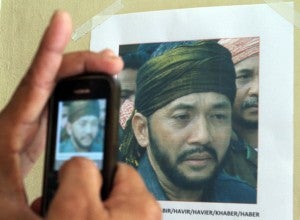 “We have so far not identified the body of Malik, but you know, we are looking at everything until we find his body. We’re not saying that he’s dead already because we have not found his body,” Armed Forces of the Philippines Chief Emmanuel Bautista told reporters at Camp Aguinaldo Friday.

The government on Saturday declared that the siege was over after they rescued all the remaining hostages, but failed to determine the whereabouts of the MNLF leader.

Police, who are now at the helm of the mopping-up operations after the three-week gunbattle, were still engaging with remnants of the MNLF around the conflict areas.

As to reports that Malik had escaped, Bautista said they “have not confirmed any” and “anything is possible.”

“We will not know for sure until we see. Nothing is still conclusive,” he said.

“We have not seen Malik so we cannot categorically say that he is dead or alive. But anyway his force has been decimated in Zamboanga. You have been witness to that. And our primary mission there was to rescue the hostages. And we did,” he also said.

To go after the forces that “invaded” Zamboanga was only their secondary mission.

“We were able to decimate that force and most of their commanders have been accounted for,” he said.