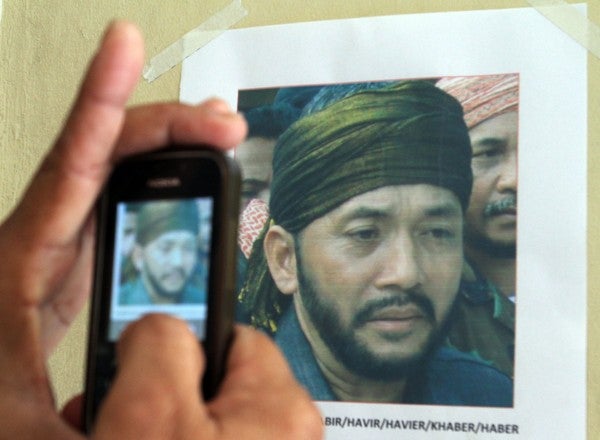 An image of Khabier Malik posted at the main entrance of Central Police Station in Zamboanga City. INQUIRER / EDWIN BACASMAS

MANILA, Philippines—The body in which an identification card of Habier Malik was found is not his, a Philippine National Police official said.

Authorities were trying to determine whether Malik, the most prominent of the seven Moro National Liberation Front commanders who led the siege, was dead. Troops found Malik’s rebel identification card in one of the clothes of a slain rebel who resembled him, sparking speculation that he may have been killed.

Purisima said authorities were still trying to determine whether Malik was among those killed and buried by collecting DNA samples.

There are also reports that Malik may have already left Zamboanga City before the military launched a full-scale offensive at conflict areas in the city last week.

The standoff between government troops and MNLF rebels started on September 9 and lasted for about three weeks.

An AP report, meanwhile, said the military has said that the slain rebel was Malik’s aide, who also kept his international driver’s license and temporary resident’s certificate in Saudi Arabia, where the rebel commander once lived with his wife. The official, who was involved in efforts to identify the slain rebels, spoke on condition of anonymity because he was not authorized to talk to the media. With a report from AP

Did Malik escape to Sulu?

Read Next
Manila bans sale, distribution of alcoholic drinks during Bar exams
EDITORS' PICK
IATF to LGUs: Issue ordinances vs attacks on frontliners, COVID-19 patients
Quick chat with Nicole Andersson: ‘You really don’t need much to be happy’
Robredo spox thanks Duterte for defending VP’s efforts vs COVID-19
Diokno to Duterte: OK to make fun of buck tooth, but focus on people’s needs first
Nograles: Cabinet members to donate 75% of monthly salary to aid COVID-19 fight
10 Filipinos positive for COVID-19 in UK, 7 in Ireland — envoy
MOST READ
Coronavirus hotbed Rizal to shut borders on April 6
Gov’t mulling quarantine period extension of 15-20 more days
Sotto on Isko Moreno’s call: We do our job without the media following our every move
Robredo spox thanks Duterte for defending VP’s efforts vs COVID-19
Don't miss out on the latest news and information.