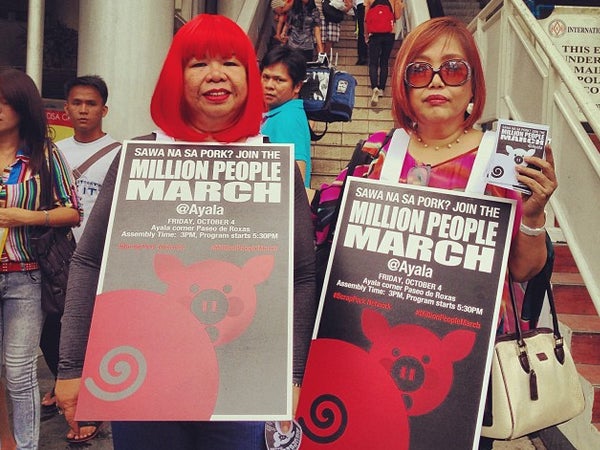 MANILA, Philippines – The sequel of the Million People March at Ayala on Friday will focus on concrete calls against the pork barrel system, organizers said.

“The people are angrier now. Because one month had passed (since the Luneta rally last August 26)…What had happened? There has been no concrete action (from the government),” lawyer Michelle Estor said Tuesday in an interview with Radyo Inquirer 990AM.

Estor, one of the organizers of the Million People March, said the Ayala rally on Friday will include discussion from experts on alternative systems to the pork barrel.

“Speakers at the [email protected] will  expose how pork remains in the Philippine budget being crafted by Congress – and in executive department funds that are allocated and distributed in circumstances that remain mysterious to Filipinos,” the group said in a statement.

Estor said the public rage has yet to subside, especially since officials claim that reforms have been implemented and yet discretionary funds are still in the 2014 proposed budget.

“The system of pork barrel is still entrenched (in the proposed budget). It’s just under a different name,” she said, referring to other lump sum funds and the capability of lawmakers to propose line-item budgets for their identified projects.

“There are different kinds of funds already being identified…worth billions…Most disturbing is the term ‘discretionary.’ Whose discretion is it? Who will decide?” Estor said.

On Facebook, the group has come out with a “unity statement” under the name ScrapPork Network with calls for the government:

— to scrap the pork barrel system and install an alternative that “will ensure the public money is strictly and absolutely for the use and benefit of all Filipinos, and not just the greedy few;”

— to make accounting of all the discretionary funds spent and to push for transparency in all levels of government; and

— to investigate those who misused public funds even “beyond the Napoles scam” and to prosecute and punish “not only its political enemies but also its own allies and appointees involved in the misuse of discretionary funds.”

The Ayala rally is expected to draw employees from the Makati area.

From Tuesday to Thursday, anti-pork barrel personalities will be going around the Ayala area wearing sandwich boards and inviting people to attend the Friday protest.

Estor said more people and organizations have pledged to join the Friday protest at Ayala corner Paseo de Roxas which will officially start at 5 p.m. (assembly at 3 p.m.) and will end at 8:30 p.m.