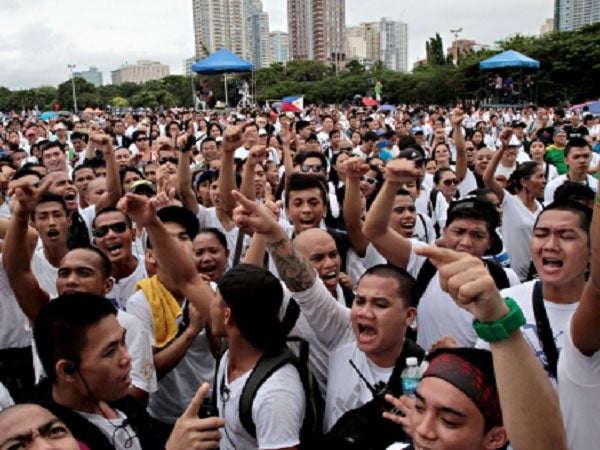 MANILA, Philippines — Organizers behind the social media-driven “Million People March” are taking the mass movement against the pork barrel system to the next level on Oct. 4 — right at the heart of the country’s financial district.

Individuals and organizations behind the previous protest actions against the pork barrel will join forces in a gathering at the corner of Ayala Avenue and Paseo de Roxas in Makati City starting 3 p.m. until 10 p.m. on Friday.

“We are inviting everyone to join us again, this time at Ayala Avenue, as this is a continuing movement to scrap the pork barrel,” Peachy Rallonza-Bretaña said at a press briefing by organizers of the Million People March at the Luneta Park in Manila on Aug. 26 and the Edsa Tayo rally at the Edsa Shrine on Sept. 11.

Amid the public outrage, President Aquino and Congress have scrapped the Priority Development Assistance Fund, a lump-sum allocation for lawmakers and a source of kickbacks, in the 2014 budget but kept the pork barrel system. Lawmakers could recommend infrastructure projects such as roads, bridges, classrooms, multipurpose buildings and water supply systems.

Various groups, including #AbolishPork Network led by Archbishop Oscar Cruz, Concerned Citizens Movement led by Harry Roque, religious organizations like the Philippine Council of Evangelical Churches, Babala led by Monique Wilson and militant organizations like Bayan and Sanlakas, announced that the rally in Makati was all set.

Bretaña said organizers expected the protest action on Oct. 4 to be unique and bigger because more employees and workers would likely join.

“Our message stays the same. But now, we are inviting our businessmen and corporate leaders in Ayala to end their fence-sitting and join the people in the call to abolish the pork barrel,” Bretaña said.

Roque appealed to the businessmen in the country to allow their employees to leave their work stations earlier than 5 p.m.

“We have also sent a letter to the officers of the Makati Business Club asking them to join us in the rally,” he said.

The organizers have also asked permission from the Makati city government to have portions of Ayala Avenue and Paseo de Roxas closed during the rally.

“The reason why we are stepping this up is to bring a united mass pressure, a mass movement that can change this broken system,” Rasti Delizo of Sanlakas said.

The program, which would include songs, performances and speeches, will start at 5:30 p.m. on Ayala Avenue.

Patricia Tan, one of the organizers of the Million People March, said politicians would again be barred from taking the stage but would be welcome to attend the rally.

Organizers called the series of protests as a “saga” that would only end if the calls were heard.

“Maybe (on Oct. 4, the government) will hear this growing clamor for change. What we have now is a leaking, bleeding system,” Bretaña said.

An online post on Facebook drew 100,000 people to march to Luneta on Aug. 26 to protest the misuse of the pork barrel funds and call for its abolition. It was followed by pockets of protests held elsewhere.

In Bacolod City, a rally against pork barrel is scheduled for Oct. 14.

Bacolod Bishop Vicente Navarra is calling on Catholics in the Diocese of Bacolod to join the rally at the Bacolod public plaza.

The rally would also push for the protection of human life, promotion of good governance and the abolition of the pork barrel fund.

In a circular, the bishop also advised all priests in the diocese to focus on the issue of the pork barrel scam in their homilies during Masses on three successive Sundays — Sept. 29, Oct. 6 and 13.

The aim of the homilies would be to educate, enlighten and awaken the faithful, he said.

“The glaring reason for the many social ills that beset our country today is the deeply embedded culture of corruption” the bishop noted in his circular. “This is the bitter fruit of our collective indifference and permissiveness.”

The rally will start with a march at 1 p.m. from the Capitol Lagoon Park, Lupit Church and West Negros University in Bacolod City, according to Cruz.

Invited to speak at the Oct. 14 rally are lawyer Romulo Macalintal and Manila Auxiliary Bishop Broderick Pabillo, chair of the National Secretariat for Social Action Justice and Peace. With a report from Carla Gomez, Inquirer Visayas