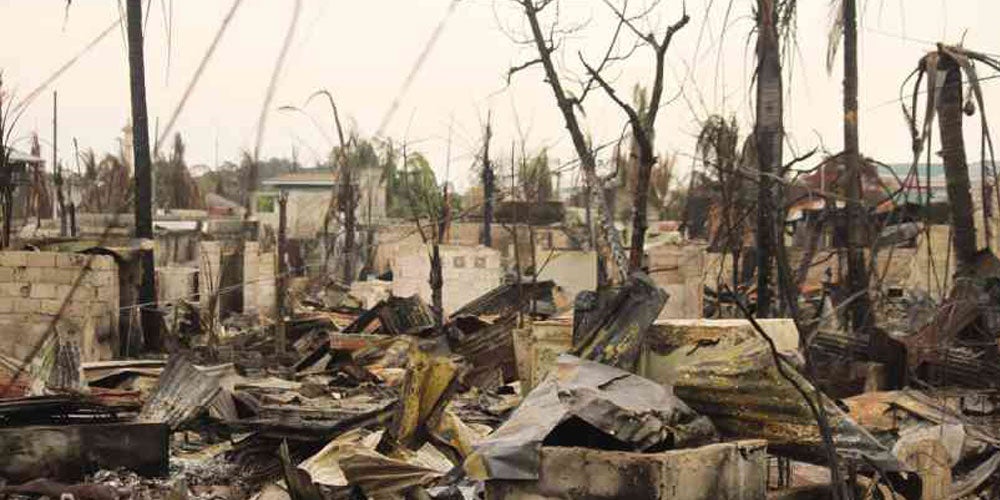 ZAMBOANGA CITY— The more than 100,000 evacuees in this city are raring to go home now that the government has declared it is clearing the villages that served as a battleground in the 20-day fighting between government troops and Moro National Liberation Front (MNLF) fighters.

Most of them, however, have no houses to return to, as these were razed during the fighting and when government forces were on its “clearing operations.”

Fire marshal Supt. Dominador Zabala Jr. said that as of Monday morning, 9,709 houses have been razed since Sept. 9. He placed the damage at at least P200.58 million.

Zabala said it was not easy for them to do an actual assessment, or even respond to fire calls, because they still needed clearance from military ground commanders.

Marilyn Sawadjaan, 40, a government employee, said MNLF forces were not behind Sunday’s burning of houses on Puerto Princesa Drive in Barangay Talon-Talon.

“All the houses of Muslims, be they Tausug or Samal Badjao, were burned. I thought it was the MNLF who were setting the houses on fire but here in Puerto Princesa, there is no MNLF, only Marines,” Sawadjaan said.

Joy Ladja, another fire victim, said she now knows what “clearing operations” mean. “It means setting our houses on fire.”

Mayor Maria Isabelle Climaco- Salazar said she also received text messages about the burning and looting of establishments and houses. “It is a very serious concern and I want this to be part of the postcrisis investigation,” Salazar said.

But Salazar said the evacuees could still not return to the houses, or what was left of them, as there was still no clearance from government security forces.

Aside from not having houses to return to, the evacuees are also facing relocation.

Abdua Nurilla, an evacuee from Rio Hondo, said thousands would protest if they were forced to relocate.

Nurilla said his great grandparents were born in Rio Hondo and that his generation and his children would die in the same coastal village.

“What we want is to be allowed to return to our village after this war,” Nurilla said.

The evacuees at Joaquin F. Enriquez Memorial Sports Complex said they heard that the government was planning to relocate families whose houses were razed in the fighting.

“We will not survive if we are transferred to dry land. This is our culture and water is our life,” Nurilla said.

Arturo, an evacuee from the village of Sta. Barbara, said forcing residents to relocate would only push them to fight back.

“Instead of the absence of the MNLF among us, its members will increase if we are forced [to relocate],” Arturo said.

But Assistant Social Welfare Secretary Camilo Gudmalin said residents would not be forced to leave their original communities.

After a series of consultations and assessments, Gudmalin said they have crafted three options for the shelter rehabilitation of residents.

First, he said, residents could choose to return to their original places and they would be provided housing assistance.

Gudmalin said the third option was for residents to be resettled in other villages that would be identified by the local government as relocation sites.

For both the “on-site” reconstruction and relocation, Gudmalin said it is important that the rebuilding be well-planned.

He said that unlike the original makeup of the affected villages in which houses where built without any urban planning, the reconstruction plan of the government ensures that these places would be conducive for living.

For the affected informal settlers, Gudmalin said the government suggests that they choose to be relocated.

“Informal settlers who can’t build on their own will be given assistance,” Gudmalin said.

Permanent houses worth P100,000 each will be constructed for the families in both the original villages and in relocation sites.

Gudmalin said the government is also thinking of building medium-rise tenements to accommodate the families who lost their homes.

But while the permanent houses are still being constructed, the residents would stay temporarily on bunkhouses, Gudmalin said.

Gudmalin said those who used to live on stilts would be provided with the same type of houses.

Gudmalin explained that the construction of the houses would be based on the cash-for-work program of the Department of Social Welfare and Development.

He said the males would be trained on industrial skills so that they would be able to participate in the reconstruction.

But it will take at least 20 days before clearing operations are completed.

Senior Supt. Julius Muñez, who is in charge of the clearing operation, said government forces are clearing “200 to 300 hectares” that were used as a battleground by MNLF forces.

“We follow procedures to ensure everything is cleared so that when the civilians start returning to their places, it is safe,” Muñez said.

On Monday, City Hall resumed operations, with the Philippine flag lowered at half mast.

“We did not raise the flag. It’s been there [since the fighting started]. We are putting it at half mast to honor the fallen soldiers, police and civilians in this crisis,” Salazar said. Julie S. Alipala, Inquirer Mindanao