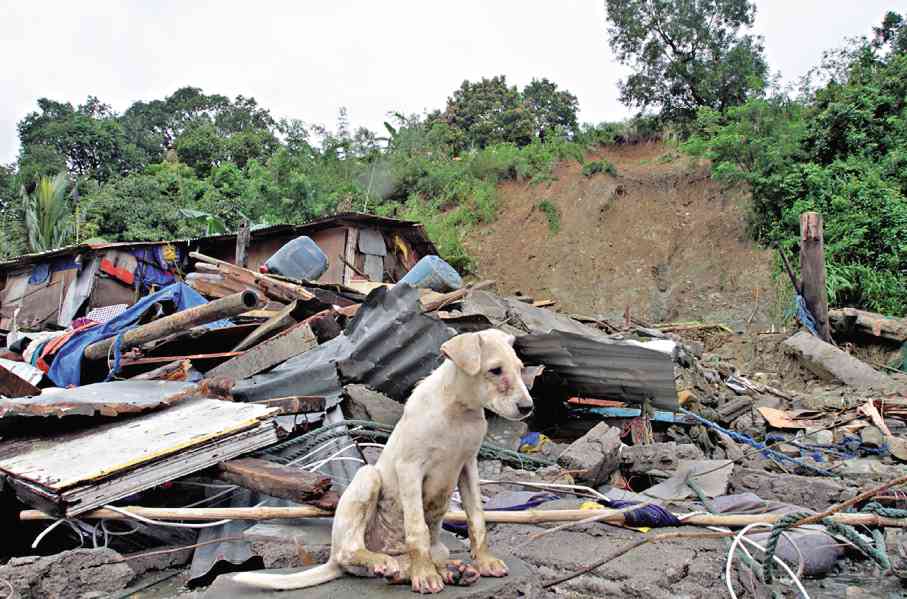 LONE SURVIVOR A dog sits on the rubble of the house of its master that was hit by a landslide in Barangay Wawandue in Subic, Zambales, on Tuesday morning. Neighbors said the dog was the first to emerge from the rubble that was covered with mud as they tried to rescue the doomed family. GRIG C. MONTEGRANDE

SUBIC, Zambales—The death toll from landslides and floods induced by the “habagat” (southwest monsoon) in the provinces of Zambales and Bataan rose to 30 on Tuesday as rescue workers continued digging up bodies buried by mud and debris in the towns of Subic, Castillejos and San Marcelino in Zambales.

Zambales Rep. Jeffrey Khonghun said areas in his district, from Olongapo to San Marcelino town, suffered the most as heavy rains from Sunday to Monday triggered landslides and floods.

Khonghun said 18 people died in separate landslides in the boundary of the villages of Wawandue and Cawag and in Barangay (village) San Isidro in Subic while four others died in another landslide in the village of Aglao in San Marcelino town.

Khonghun, former Subic mayor, said landslides are rare in his hometown. “But during these past days, the rain was so heavy. There was too much water and the soil became soft,” he said.

Castillejos Mayor Jose Angelo Dominguez said his town recorded five fatalities from a landslide in the village of Balaybay.

Another fatality, a drowning victim, was reported in Olongapo City.

No move from gov

Despite the death toll, Zambales officials on Tuesday have yet to declare a state of calamity in the province, Vice Gov. Ramon Lacbain II said.

Asked why, Lacbain said Gov. Hermogenes Ebdane Jr. has not asked the provincial board to do so.

On Monday, officials of Olongapo City and Subic town declared a state of calamity in their areas.

Subic Mayor Jefferson Khonghun appeared to be shocked as he supervised rescue operations in the village of Sta. Monica, where hundreds were trapped.

“This is too much. We’ve never experienced anything like this before,” he said.

In Olongapo, City Administrator Mamerto Malabute supervised the rescue and clean-up operations in the city on Tuesday. “Floodwater in the city rose fast and flooding was widespread. It surprised everybody,” he said.

In Bataan, Rudy Cureg, 65, died after a heart attack on Monday when he tried to save his house from caving in near a swollen creek in Balanga City.