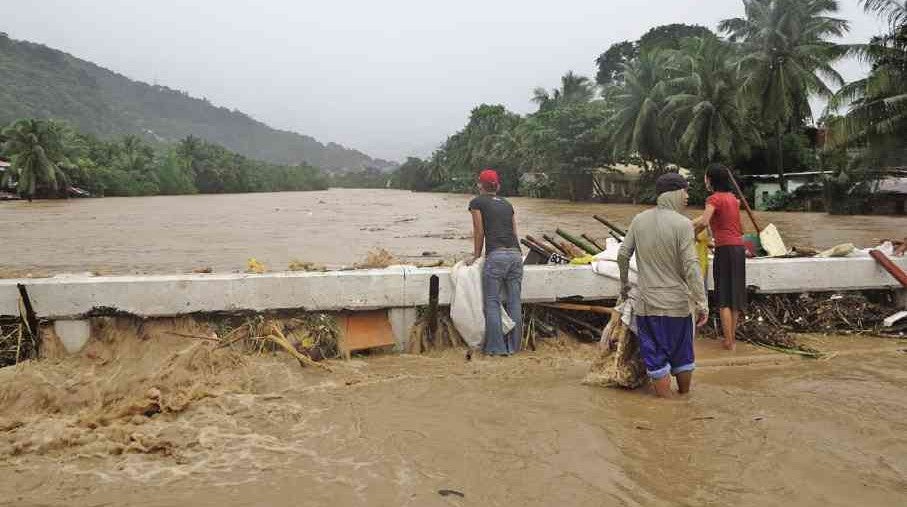 OLONGAPO residents woke up Monday to the sight of a swelling river and rising floodwater that submerged and crippled the city. ROBERT GONZAGA

There is a first time for everything, it seems. In Olongapo, shock and fear intermingled with surprise as residents recounted the impact of monsoon rains that generated record-level flooding that engulfed the city on Monday.

Armand Milagrosa, a resident of Sta. Rita village, said the widespread flooding was worse than Tropical Storm “Ondoy” or last year’s “habagat” (southwest monsoon-induced rain). “It’s worse than any storm I can remember,” he said.

Milagrosa, 42, who grew up in Olongapo, said water began to rise about 2 a.m., just when everybody was sleeping. “The speed of the water’s rise and the current’s strength as it rushed inside the house surprised us,” he said.

Historically, Sta. Rita is the first to experience floods since it is a low-lying area. But on Monday, almost all of Olongapo, a city of more than 220,000 people, was submerged in floodwaters, according to city administrator Mamerto Malabute.

“Cars were being swept away and flood water covered 90 percent of the city,” he said, noting that in most parts of the city, water was waist level or higher.

Jun Diego, another Sta. Rita resident, said his neighbors were not able to save anything but their clothes. “Even then, they were soaking wet. Now they’re just sleeping by the side of their houses, most of which were damaged,” he said.

As floodwater swelled the river that runs through the city, those living along the waterway could not do anything but watch their houses and belongings being swept away.

From 9 a.m. to 10 a.m. on Monday, the amount of rainfall in the Subic Bay area in Zambales was at 77 millimeters. “That’s more than torrential, that is already a deluge,” Loiz said.

Landslides also hit parts of Olongapo, with the biggest hitting Sta. Rita. By the side of the river, near the bridge, a section of land collapsed into the raging waters – taking down at least three houses. However, no one was hurt in the landslides, after residents started leaving danger areas early.

By 7 a.m., power supply to several villages was cut off, as electric posts were toppled and power lines snapped.

On Tuesday, residents who still had electricity and who witnessed the impact of the monsoon went on the social networking site Facebook to post photographs of the devastation.

Among the memorable images was the flooding at the city market, which nearly covered the entrances. Vehicles in parking lots were submerged in water, some swept away by floodwater.

Ruel Manalo, an overseas worker based in Hong Kong, could only monitor the events through Facebook as residents posted the developments. Manalo, whose family lives in the city, said floodwater reached the roof of his new Toyota Innova.

“In my house, the water reached almost neck level. It’s agonizing to learn about this, especially since I am here in Hong Kong. There’s nothing you can do,” he said.

The Inquirer witnessed the impact of raging floodwater at the Kalaklan Bridge, which was overtopped by the Mabayuan River—something that never happened before. Remnants of houses, trees and other debris were swept away.

Danny Perez, who collects and sells junk for a living, took the opportunity to retrieve items that were floating by, scooping them from the water. Others joined him at the Kalaklan Bridge, waiting to save items that belonged to other residents whose houses were swept away.

Rescuers tried to get residents who were marooned in at least 15 villages. But the sheer number of those needed to be rescued overwhelmed the rescuers.

Lita Santos, a resident of Mabayuan, said: “We called and called the Olongapo City Hall, but no one responded. We were trapped in our house, and the water was rising fast. Nobody came. We were so fearful that night.”

Others echoed Santos’ sentiments, as they too, awaited for rescue that never came.

But a rescue worker said there were too many who needed help.

“We could not get to them when they wanted. Also, we’re just human. we could not go to areas where the water was too high, and the current strong; otherwise we would also become victims. These people should have left their houses when they knew the water was rising,” the worker said.

Residents, like Diego, lamented that the rescuers did not have the proper equipment, so they failed to come to the aid of residents. “It happened so early in the morning, there wasn’t much time to react anymore. It’s nobody’s fault,” Diego said.

Malabute, who was left in charge of the city as Mayor Rolen Paulino was abroad on Monday, said a command post was set up at SM Olongapo and rescuers, even those from other provinces, helped out.

By midday, the city declared a state of calamity, but in the aftermath there was only one

fatality—Hilda Escobar, a former principal, who was swept away by floodwaters in Barangay (village) Tabacuhan.

“Now, there is so much dirt and mud, so we’re having clearing operations. This has never happened before, and I hope it never happens again,” Malabute said.

After the heavy monsoon rain and flooding, Olongapo residents on Tuesday started cleaning and drying out their soaked furniture, clothes and belongings in front of their houses as they tried to bounce back from the unprecedented tragedy.