Flag up past 2 weeks, in tatters but no other can fly in Zambo | Inquirer News

Flag up past 2 weeks, in tatters but no other can fly in Zambo 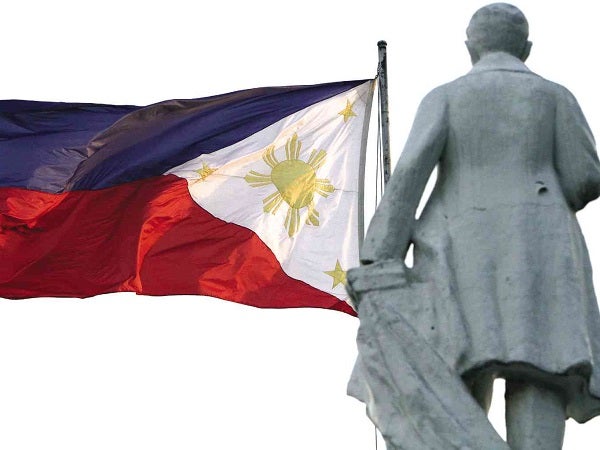 NO TO ‘INDEPENDENT’ STATE No one will take the Philippine flag from the city’s people, says Zamboanga City Mayor Maria Isabelle Climaco-Salazar of the flag in front of the statue of Jose Rizal at City Hall, a symbol of the city’s refusal to yield to the “independent” state that the MNLF wants to establish in the region. EDWIN BACASMAS

The Philippine flag flies from the top of a 15-meter pole in a courtyard in front of the Zamboanga City Hall, overlooking deserted streets in the commercial district here called “pueblo,” now guarded by heavily armed security forces and volunteers.

The flag is noticeably new and its red and blue are still bright. But the flag is torn at one end because of flapping in strong winds—continuously for the last two weeks.

Mayor Maria Isabelle Climaco-Salazar told the Inquirer on Saturday that the Philippine flag has not been brought down since Moro rebels stormed into coastal villages in Zamboanga on Sept. 9 with a plan to march into the city and hoist their flag at City Hall.

Government security forces intercepted the rebels on the coast, foiling their plan to take Zamboanga City for their “independent Bangsamoro Republik.”

Keeping the Philippine flag up day and night, Salazar explained, is the city’s way of showing that it will never allow any other flag to fly at City Hall.

No one will take the Philippine flag from the city’s people, Salazar said.

But Salazar wondered why Nur Misuari, leader of the Moro National Liberation Front (MNLF) rebels holed up on the coast, had chosen Zamboanga City to plant his Bangsamoro standard.

Zamboanga City is not even part of the Autonomous Region in Muslim Mindanao (ARMM), she said.

After decades of fighting for a separate Muslim state in Mindanao, the MNLF signed a final peace agreement with the government in 1996.

Feeling ignored, Misuari declared an “independent Bangsamoro Republik” in July and appointed himself chief of the Bangsamoro armed forces.

On Sept. 9, about 200 of his followers swept into coastal villages in Zamboanga City to raise the Bangsamoro standard. They took over coastal villages and took dozens of villagers as hostages and used them as human shields to thwart a military assault.

Fighting between state security forces and the rebels has been going on since, leaving more than 100 people dead, dozens wounded and shutting down the city.

The city is the trade hub in Western Mindanao. “Supplies that embark in our airports and pier are taken to Basilan, Sulu and Tawi-Tawi as well,” Salazar said.

In the two weeks of fighting between the government forces and Misuari’s followers, the city has lost P4.34 billion in trade and commerce, twice the city government’s annual budget, Salazar said.

Citing figures from the National Statistical Coordinating Board, Salazar said the city’s losses amounted to P344 million a day, including lost earnings of banks and commercial establishments.

“We are bleeding daily, but we are very resilient. We will recover,” Salazar said.

She said the “greatest damage” done to the city was hurting what she called the “human economy.”

Hundreds of the city’s residents are daily wage earners, she explained. For nearly three weeks now, many of them have not worked because the fighting has shut down businesses in the city.

Fighting between security forces and Misuari’s followers continued for a 13th day on Saturday, as the military pressed a “calibrated” offensive to crush the remaining rebels and free some 20 more hostages.

A “calibrated” military and police operation has cut down the rebel force to 30 to 40 men.

The state security forces have also boxed Misuari’s followers in a 3-to-7-hectare area on the coast, and Mr. Aquino has called on them to surrender to avoid further bloodshed.

Most of the hostages have either escaped or been rescued during the military-police operations.

On Saturday, five more rebels and a 71-year-old woman were killed and two soldiers wounded in the fighting.

As of Saturday, the military said 102 MNLF rebels and 12 soldiers and three policemen had been killed, while more than 100 gunmen were captured or surrendered.

One hundred-ten soldiers, 13 policemen, 69 civilians and nine rebels have been wounded.

At least 12 civilians had been killed, including 71-year-old Norma Lladores whose home in Tetuan village was hit by rebel mortar fire on Saturday morning.

Insp. Elmer Acuna, Tetuan police station chief, said Lladores was one of the residents who cooked meals for the thousands of people who had been displaced by the fighting and sheltered at evacuation centers in the city.

Military spokesperson Lt. Col. Ramon Zagala said only about 30 to 40 remaining gunmen holding about 21 hostages were engaged in sporadic fighting with troops.

“We’re doing house-to-house search operations today and their area of operation has become smaller,” he said.

The rebels’ return fire was no longer heavy, Zagala said, adding that it was an indication that the insurgents were running out of ammunition.

Zagala noted that as government troops delivered volume fire on the rebels’ positions, the insurgents countered with sniper fire.

“They are trading space for time,” Zagala said. “But we have the momentum.”

Zagala said the authorities believed the rebels’ leader, Habier Malik, was still in the area.

“We believe he is still here. Our data show that he is here,” Zagala said. With reports Julie S. Alipala, Inquirer Mindanao and AFP