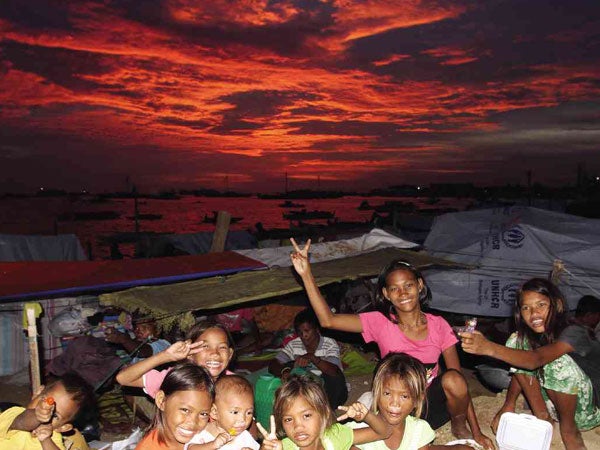 CHILDREN OF WAR As darkness creeps in at the end of another day of fighting in Zamboanga City, children remain cheerful and optimistic that the next day will bring peace in their troubled city. These children and their families, who have taken refuge in makeshift shelters along RT Lim Boulevard, are among the tens of thousands who have fled the fighting. EDWIN BACASMAS

As Commander in Chief of the Armed Forces, President Aquino on Thursday took full responsibility for the government’s response to the crisis caused by the attack on Zamboanga City by rebels of the Moro National Liberation Front (MNLF) faction led by Nur Misuari.

“I am both the Commander in Chief and the President, therefore, at the end of the day, everything is my responsibility,” Aquino told reporters in Zamboanga City after the reopening of the airport there to traffic on Thursday.

From about 200 at the start of the conflict on Sept. 9, the military has reduced the number of the MNLF attackers to 30 to 40, killing 89 of them in gun battles and arresting or accepting the surrender of 70 others.

Appearing in public Thursday for the first time since he arrived in the city on Sept. 13, President Aquino called on the rebels still holed up in a small area on the coast to surrender.

“You’re already encircled, and [the government] has shown that you’re not as strong a force [to contend with].”

Aquino issued what could be an ultimatum to the rebels: “It’s not too late. For the remaining forces of the enemy, [let me say that] life is sacred to me. You might want to assess if your life is still valuable, and it’s not yet too late to bring an end to this.”

He added, “[Reducing] the number of fatalities and injured is in your hands.”

Aquino reiterated that the government would fight violence with violence.

“[The] state has demonstrated that it has enough forces and is ready to use [them],” he said.

But the President said the Zamboanga crisis and the attack on Lamitan City in Basilan province across the strait were the handiwork of only a few MNLF men.

He said the government was fighting only the Misuari-led faction of the MNLF, not the entire organization.

The President said he found the “posturing” of Misuari “hard to understand.”

“[He] declared independence but [in the same breath] said that the peace process continued. If they assemble, they call it ‘peaceful rally,’” Mr. Aquino said.

“[Misuari] tried to push the envelope, [testing the patience of the] government,” he said, adding that armed MNLF men could not just march through Zamboanga City without causing fear among the residents.

“The other factions [of the MNLF] condemned this,” Aquino said, adding that the groups not supporting Misuari were ready to discuss with the government sentiments that MNLF members have had since the signing of the peace agreement in 1996.

The MNLF faction led by Muslimin Sema condemned the Misuari faction’s attack on Zamboanga City and said it would continue to negotiate with the government the full implementation of the 1996 peace accord with the help of the Organization of Islamic Cooperation.

“We are ready to face those wanting to peacefully negotiate a permanent peace,” President Aquino said.

Aquino said the government could not guarantee that disgruntled groups would not resort to violence and if they did, the government would seriously face them.

He cited the current Zamboanga crisis as an example of the government’s readiness to confront violence.

“When this crisis started, our security forces were ready. Instead of the enemies occupying more territory, the size of their area has shrunk by the day,” he said.

Killed on the government’s side in 11 days of fighting were 12 soldiers and three policemen. Seven civilians were also killed.

The fighting has displaced 118,819 people who are now sheltered in 57 evacuation centers in Zamboanga City and other parts of the Zamboanga Peninsula.

The rebels seized about 200 civilians and used them as human shields against the military assault that began on Friday.

One hundred seventy eight of the hostages have either escaped or have been rescued. One was killed in the crossfire between the rebels and the security forces. Twenty one are still in the hands of Misuari’s followers. 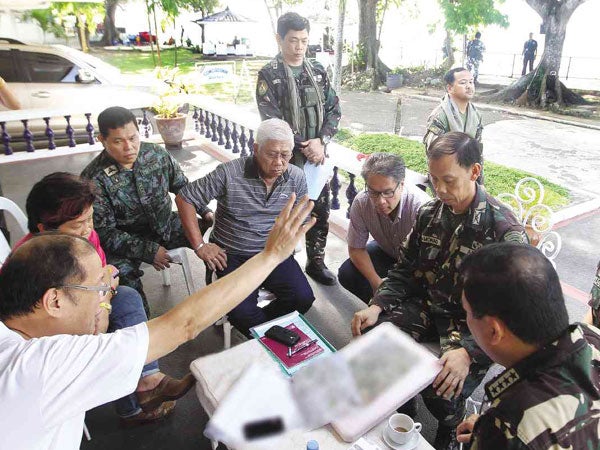 WAR ROOM President Aquino, as Commander in Chief of the Armed Forces, holds a meeting with Cabinet members and security officials at an undisclosed location in Zamboanga City where government troops are undertaking mopping-up operations against MNLF rebels. MALACAÑANG PHOTO

Aquino said he had been “very involved” in the process, receiving briefings and adding his own “inputs” to the security operations.

But he admitted that he was being aided by officials and agencies involved in responding to both the security and the humanitarian aspects of the standoff.

He said he was being briefed regularly by the Department of Social Welfare and Development on the “other effects of the crisis,” referring to the urgent needs of the evacuees.

“I ask them what is needed. I authorize the release of funds. I [talk] to the Bangko Sentral to ensure that the cash supply, physical cash supply, is present,” he said.

He was also talking with the trade, transportation and agriculture departments “to ensure that basic goods were available” and that the food distribution should cover not only Zamboanga City but also Basilan, Sulu and Tawi-Tawi provinces.

He denied being a “micromanager,” saying his presence in the conflict zone should not “create the image” that he was not satisfied with the performance of his officials.

“I placed people in their posts because we believe that they have the competence to fulfill their responsibilities,” he said.

But bothered by questions arising from some aspects of the military and civil operations, he decided to fly to Zamboanga City on Sept. 13 to seek “clarification,” he said.

Explaining his decision to remain in the war zone for nearly a week now, the President said he wanted to have a firm grasp of the crisis and make sure that his directives were clearly transmitted and understood by ground officials and troops.

He said that before he left Manila, he communicated with officials on the ground through video conferencing but the technology “needs improvement.”

“So we came here to speed up the information dissemination and decision-making, clarify what needs to be clarified—either on concepts or the decisions we’re implementing,” Aquino said.

On Day 11 of the Zamboanga standoff, the safety of the remaining hostages was foremost in Aquino’s mind.

Aquino assured the residents that the goal of the government is to prevent a recurrence of the crisis.

“What’s our assurance that this will not be repeated? Of course, we’ll further improve on intelligence services,” he said.

But the President again pointed out that were it not for the efficient intelligence network of law enforcement authorities and security forces, the rebels could have achieved  their goal of massing in front of Zamboanga City Hall.

He also credited the readiness of the local security forces and the “overwhelming [augmentation] force” deployed by the military for severely constricting the rebels’ movements.

Aquino promised to increase police and military presence in Zamboanga and vowed to fully equip the troops and police officers.

“At the end of the day, the cooperation of the public will greatly enhance the capability of government,” he said.

On reports that the Misuari-led MNLF had brought into the city guns and armaments ahead of the Sept. 9 attacks, Aquino said he found it impossible such an operation could remain undetected by the authorities for so long but added: “So I also want to know how could (the rebels covered up) such a situation.”

The President also took time to talk not only on the relief efforts but the long-term rehabilitation of the city, especially resettling informal settlers and providing homes to families whose houses in Santa Catalina village were torched by the rebels to slow down the military assault.

“Between the contingency and the calamity funds—which I might add other lump-sum funds that were recently criticized as (presidential pork barrel)—we have about P6.1-billion” available, he said.

Asked if he was leaving the city soon, he said he would stay until the crisis was over.