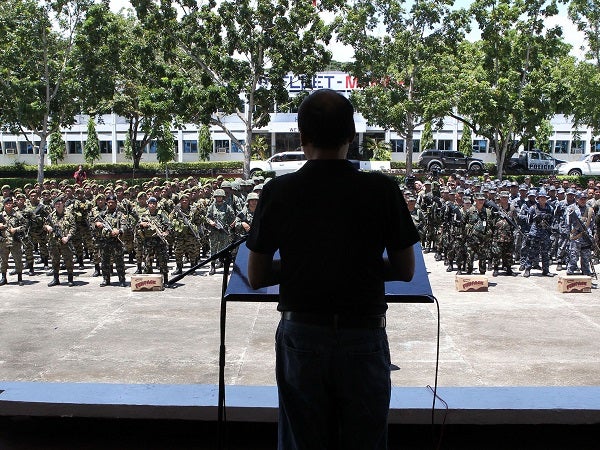 DAVAO CITY, Philippines—President Benigno Aquino III said on Thursday that the government would not hesitate to do full battle with Moro National Liberation Front fighters while taking into consideration the safety of civilians taken hostage by the MNLF in Zamboanga City.

“In this case, the state demonstrated that it has enough force and is ready to use it,” Mr. Aquino told reporters at the Zamboanga City Airport during a press briefing, which was also aired on ANC.

He said the determination that government demonstrated in the past 11 days should be enough for the remaining MNLF men to consider yielding.

“It’s not too late yet for the remaining enemies (to give up). They should know that life is important. They might want to look at how important life is,” the President said.

Mr. Aquino also said the Zamboanga City crisis and its spillover in Basilan was the handiwork of only a few MNLF men.

“The other factions (of the MNLF) condemned this,” he said, adding that those not supportive of Nur Misuari have expressed readiness to discuss with the government the general sentiments that MNLF members have had since the signing of the peace agreement in 1996.

Complaints against the government’s alleged failure to implement some provisions of the peace agreement – including the formation of a regional security command – were not isolated to Misuari’s followers.

Even those belonging to the faction headed by Muslimin Sema of the Council of 15 had the same complaints against the government in so far as implementation of the 1996 peace agreement was concerned.

But the Sema faction said it would continue to negotiate with the government for the implementation of some provisions through the help of the Organization of Islamic Cooperation (OIC).

“We are ready to face those wanting to peacefully negotiate for permanent peace,” Mr. Aquino said.

The President said even if the government was open to negotiations, disgruntled groups might continue to use violence in pushing their cause.

“Can I guarantee that there will be no terrorist activities anymore? There is no nation that could make such guarantee,” he said.

But then, he said, the government would fight forces that would seek to destabilize the nation.

Mr. Aquino cited the current crisis as an example of government’s readiness to confront violence.

“When this crisis started, our security forces were ready. Instead of the enemies occupying more territories, the size of their area shrunk by the day,” he said.

But he said the public should not take things for granted even if the government was there for them. Public cooperation, he said, has always been and would continue to be important.

He added that the government understood the sentiments of the evacuees about going home but could not readily allow them to go back to their homes in areas recovered by government troops from MNLF gunmen.

“We understood they (evacuees) want to go back to their homes already. But are we sure they are safe? That there will be no more mortar (shelling)?” he asked.

Mr. Aquino said the evacuees should not worry because the government – which estimated a P3.89-billion relief and rehabilitation budget – had the “necessary funds to take care of them.”

“We assign people responsibilities because we knew they were capable of fulfilling them,” he said.

But then, the President said as “both commander-in-chief and the President, everything is my responsibility so I’m very involved.”

Aquino: We will talk only to those who want peace

Read Next
Clashes erupt as Zamboanga City airport reopens, some areas back to normal
EDITORS' PICK
Legarda emphasizes role of ICC/IPs in nation building this IP month
Isko Moreno bares ‘two-pronged’ approach to rehabilitate MSMEs
What’s at stake for every fighter at ONE: NextGen
Climate Change Commission and Nestlé PH to discover sustainability-focused solutions
NCR’s COVID-9 alert level may be downgraded from 3 to 2 soon — DOH
Gordon calls 2 Pharmally execs ‘Senate fugitives’ after no-show in probe
MOST READ
Drivers with no traffic violations can now renew licenses for 10 years
LJ Reyes says Paolo Contis made ‘no efforts’ to talk to her after their split
Yang’s Princeton degree raises eyebrows among senators
Gordon to Duterte: You? Teaching me courtesy?
Don't miss out on the latest news and information.